“I have recorded images of two very common parakeets – Rose-ringed (Psittacula krameri) and Red Breasted (P. alexandri) – but have only seen the Long-tailed (P. longicauda) once last year but it was late in the evening at about 7pm so those images were not very useable. But back then I saw a whole flock of about 7 or 8 of then, probably 3 males.

“Today, is one of those day where the sky threatens with thunderstorm so not a day for any birding. But luck was with me, these pair of Long-tailed Parakeets came to check out the MacArthur Palm (Ptychosperma macarthuri) just a few meters from our balcony. While other birds preferred the ripen red colored fruits and would not eat the yellowish green ones, these parakeets seem to take both. I have never seen the Rose-ringed and Red-breasted eat fruits of this palm. “My initial attention was in the colorful male (above) which seems to be more skittish and stayed at the back of the juvenile (below) so I took a few shots of the juvenile which is not perturbed by my moving nearer (to the edge of my balcony). It noticed me, gave a short direct stare in a calm manner, in a very different way the male looked at me. From the shots, I noticed there is a sort of chain on the left leg of this juvenile. This is probably an escapee from some pet shop or someone’s pet. “That probably explained why the juvenile is more tolerant to human than the male. Anyway, I am not sure if Singapore authorities allow this species of parakeet to be sold as pets. Got a last shot of the male with its tail fully extended, which is as long as the length of its body (below). They had their fill of the MacArthur palm’s fruits before the male decided to leave followed by the female. Looks like this female has found love and escaped from her human captor but the chains on her leg could get entangled in some branches and spell the end of this romance.” 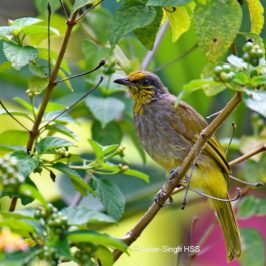 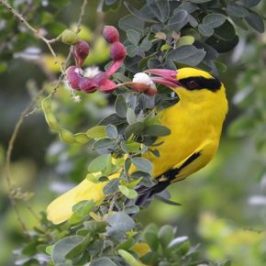 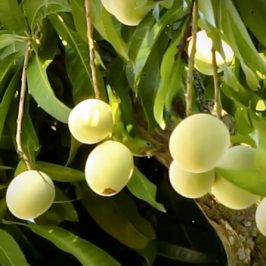