William Ip is sharing his images of waders that he photographed in Nam San Wai, Hong Kong, somewhere near the Wetland Park sometime last year. Field ornithologist Wang Luan Keng thought the above pair of birds to be Spotted Redshanks (Tringa erythropus) and suggested that David Li of Singapore’s Sungei Buloh Wetland Reserve should be consulted as he is among the best in shorebird identification. Well, David confirmed Luan’s ID. David also identified the Common Greenshank (Tringa nebularia) (above and below). According to William, “…only these two among the group were not tolerant to each other. They stared and challenged each other for a while before they fought, jumping on each other. The fight was short and the two of them separated within a couple of seconds. No injury was noticed.” Most shorebirds get together peacefully to forage, especially when food is plentiful. However, as food becomes scarce, individuals begin to establish feeding territories. This usually happens among those that forage by means of visual techniques. And when conflicts happen, mandibular clashes are common LINK. 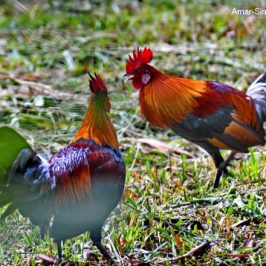 “I had an opportunity to watch the interaction between two male Red Junglefowls (Gallus gallus... 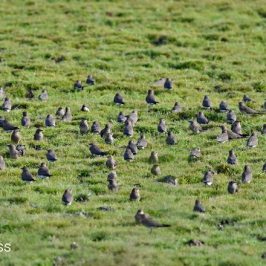