“A Pink-necked Green-pigeon (Treron vernans) was seen returning to a Bottlebrush (Callistemon sp.) a few times to collect nesting materials at my condo yesterday morning at about 8.30 am.

“I got my camera readied on the tripod hoping to have a more steady record.

“Instead, a Black-naped Oriole (Oriolus chinensis) appeared in no time and landed in a cluster of flowers sipping nectar.

“In a post by Kwong Wai Chong in July 2010, he was not sure whether Black-naped Oriole took nectar of bottlebrush flowers LINK

“The edited video above confirms that Black-naped Oriole do take nectar of bottlebrush flowers. There was no rain for a week, so there is no question of the bird taking in rain water. Dew is also out as any remaining would have evaporated by then under the strong sunlight. Furthermore the Oriole always reached for the base of the flowers instead of the tips of the filaments, which gave the flower spikes the colour and distinctive ‘bottlebrush’ shape.

“The bill and throat movements of the oriole in between sips gave the impression that the bird savoured the goodness of the nectar.” 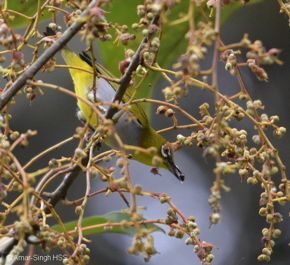 The Red Data Status of the Everett’s White-eye (Zosterops everetti tahanensis) is Locally Near Threatened...