The location was Singapore’s Chinese Garden. The date was 1st January 2013. Samson Tan and friend… LINK noticed a Peregrine Falcon (Falco peregrinus) perching on a branch of a casuarina tree (Casuarina equisetifolia). There were many crows in the garden and Samson expected them to mob the falcon, as is usually the case. True enough, after about 10 minutes, the mobbing started. One by one the House Crows (Corvus splendens) flew by, diving near to where the falcon was perching (top and above). The latter simply ignored the crows but kept an eye on them. Failing to chase the falcon away, the crows changed tactic. One grabbed the tip of the branch where the falcon was perching, causing the falcon to lose its balance (above and below). The falcon flew off with the crows flying after it for a short distance. Victory to the crows. “Well, I must say that I’m impressed! The crow is indeed quite an intelligent bird that can react to different challenges,” concluded Samson. 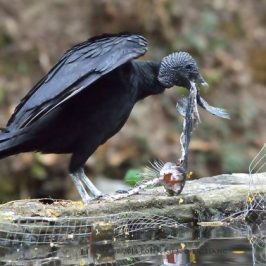 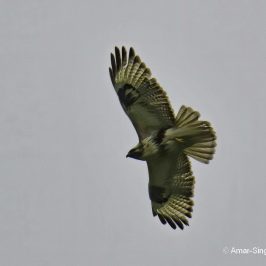