Through the courtesy of Dato’ Dr Amar-Singh HSS we were made aware of Simon van der Meulen‘s image of a pair of Coppersmith Barbets (Megalaima haemacephala) with bills interlocked, one firmly perched on a branch and the other hanging freely. The image was photographed on 21st December 2012 in a public park in Bangkok, Thailand. According to Simon, “We first thought that one [of the barbets] was just feeding the other, but once looking through the binoculars, we observed that one was just hanging on to the other by interlocked beaks. No feeding was apparent. Notice the free-hanging barbet above… A very funny sight and I have no clue what was actually happening. Any suggestions/explanations are appreciated!”

Note:
Can the barbets by indulging in allobilling as seen HERE and HERE? But then in these cases the pair is firmly perched and not one supporting the other as in the barbets. 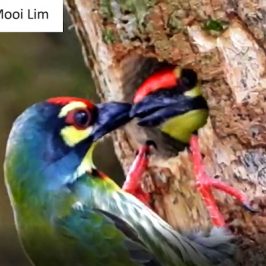