“I had on several occasions heard the hooting calls of birds near the Upper Thomson Road end of Bishan Ang Mo Kio Park. There are many tall trees there, including the African Mahogany (Khaya grandifolia) and at least 15 Cannon Ball Tree (Couroupita guianensis) which I only realised their existence recently.

“The calls were always heard at around 7pm, when it was dark and the source making the calls could not be seen. On 21st April 2012, I heard them again. This time it seemed that two birds were involved, one responding to the other.

“This video was produced by extracting the audio from a video clip and then played back with Audacity Audio Editor, enabling the sound wave form to be visualised.

“Before this I have neither seen any owl nor heard its calls. After spending quite a long time trying to identify the owl with the help of the article “Owls in Singapore” LINK and [the site sharing bird sounds from around the world] LINK, I am inclined to conclude that what I heard was the calls of Collared Scops Owl (Otus bakkamoena), it is named as Indian Scops Owl in xeno-canto. It is quite surprising that nowhere else from internet could I find another sound clip of this owl’s call while xeno-canto has only two samples.

“Incidentally, there is a youtube video of Collared Scops Owl with the calls heard, possibly taken in infra-red light LINK.

“Some interesting information regarding the Cannon Ball Tree:

‘The name of this glorious tree is very indicative of the characteristics it displays. Popularly referred to as the ‘cannonball tree’ because not only are the fruits as large, round and heavy as their namesakes, but when falling to the earth, they often do so with loud and explosive noises. Naturally, such trees are not planted next to footpaths, because a falling fruit could easily cause a fatal injury.” Read more at LINK” 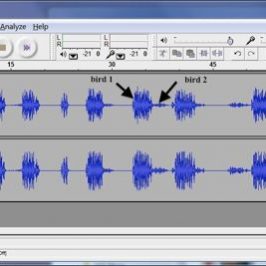 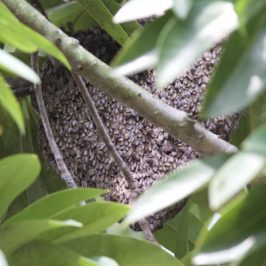 In late September 2008, my helper Estela Acierto pointed out a colony of bees gathering... 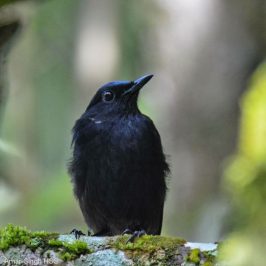