“Geographical history mentions that about 40 million years ago, the Australia-New Guinea continent broke free from Antarctica whose ancestry, the super, single mass continent of Gondwana was believed as described.

“The continent of Australia-New Guinea began to drift northwards carrying with it many flora and fauna species that to this day, evidence still remains of their shared existence.

“A living tree example relic of Gondwana period is this Antarctic Beech (Nothofagus moorei) photographed at Lamington NP S.Queensland Australia, August 2008. Research scientists discovered evidence of pollens of similar species having existed in Antarctica, where once it was a warmer place where trees grew (left).

“Here, a supposedly recent October 2012 Cassowary photo footprint with my boot for size comparison in the lowlands of Papua, New Guinea, showed the once avifauna connection with the continent of Australia. |Plate 2 |

“As Australia-New Guinea continent continued to drift towards a warmer Asia during the glacial periods of ten thousand to two million years ago, expansion and contraction of land mass caused the northern continental sector to further fracture and sub-fractured. The result left some flora and avifauna species stranded and eventually evolved into endemic entities. “This large fractured part today is called New Guinea – the second largest island in the world.
New Guinea together with some smaller fragmented islands collectively known as the Bismarck Archipelago nearby is a rich avifauna haven of no less than 800 bird species and counting.

“Apart from an interesting geographical evolution and high degree of bird endemism as a result of this continental shift, to include some avifauna species of the Oriental region that had managed to reach certain areas of New Guinea, certainly makes Papua New Guinea a marriage haven of Australo-Oriental birding at its best!

“As my full-time hobby and passion for observing birds and photography grew over the last thirteen years, so was and is my conquest to visit and see as many places as I possibly can; for all signs are showing negatively, the world is losing bird species at an alarming rate.

“My recent birding visit to Papua (Irian Jaya) – the western political Indonesian half of the island of New Guinea-was but a fulfillment of my missing third piece visit after Australia, no less than six occasions and Antarctica in 2005. “The more I saw, the more I find the urgent need to document findings and observations for contribution to reliable websites for the benefit of the present, next generation or two at most.

“In Waigeo Island, Papua, our expedition team set camp near Na Kwau River. The sluggish river of stones we swam in, cuts through undulating terrain of thick, primary, pristine tropical forests, providing spectacular canopy views of many tree species of variable heights, before emptying into the Dampier Strait (above left).

“I took to observing birds alone that evening of 14 October, 2012 along side the river. What caught my eye was a familiar flowering tree seen before in Australia, located about the area of pink arrow as shown (above right). “Into my Wellington boots and onto the shallow side of the river, I stood. My observation confirmed a red flowering tree- a wild native Queensland Umbrella tree species (Schefflera actinophylla) with floral branches and signatory foliages conspicuously sprouted out from nowhere amongst other trees along side the river bank.

“With a height of no less than 40m and crowded in, it was difficult to discern the main trunk. I am not aware of any of this or related species that could grow so tall. It was highly probable the Umbrella tree had been propagated wild by birds and having found a host tree, turned epiphytic.

“What was more delightful was a dark looking bird amongst the octopus looking palmated leaves. The bird was seen foraging blooms or whatever that had left over by noisy Parrot species that patrolled the river course (left).

“A rather weird looking bird of largish size (33-37cm) with bare skin on side of head and a black knob on the upper mandible, soon had a name- Helmeted Friarbird (Philemon buceroides) and is a local resident sub-species –novaeguineae also known as New Guinea Friarbird (P. b. novaeguineae) (below left) “[The image above-left] shows bird consuming a Schefflera actinophylla bloom. A long shot image made possible by digiscopy with five legs (tripod and a pair of Avian Writer’s Wellington boots) on river bed.

“Do join me on another interesting observation in Papua to discern birds’ location using an easy ‘CLOCK METHOD.’”

Reference:
Birds of New Guinea and the Bismarck Archipelago by Brian J. Coates 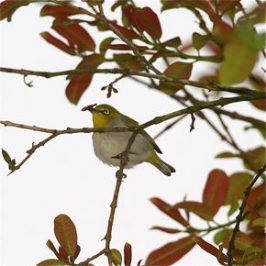 This is another example of the usefulness of images and the importance of the camera...