“The Asian Openbill (Anastomus oscitans) is a prominent and regularly sighted stork in Thailand, usually seen flying overhead or foraging for molluscs among paddyfields (above). “While observing the activities of a flock one morning in October 2012, some individuals would face the rising sun and part their wings to welcome the warmth (above). “One individual was observed to turn its back to the sun, and then fully extend its wings and tail feathers to catch the sun’s rays, just like a solar panel (above). “After a few minutes, it folded in its right wing but allowed its left wing to bathe in the sun for a little longer (above).

“Another little example of fine-tuned thermoregulation among birds.” 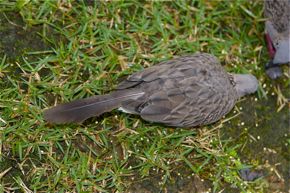