“My autumn visit to Queensland, Australia in early March 2008 saw an abundance of red blooms of the Schefflera Queensland Umbrella Tree (Schefflera actinophylla) – a native Australian tree of which their flowers blossomed out in sprays. These trees are commonly found alongside parks, residential roads and gardens (above).

“It is also known as the Octopus tree, I don’t know exactly why but perhaps for the shape of their leaves with no less than seven grouped together at a long stem, looking like an umbrella. Left unattended, it is possible such trees could grow tall with complicated root systems and become a nuisance to certain home communities. “The colourful blooms attract a host of birds especially parakeets. By far, the most commonly seen and heard birds had to be those lovely Rainbow Lorikeets (Trichoglossus haematodus) that superiorly reign the Australian skies, flashing their seven most colourful plumages ever imagined (above). “Here we have ‘Octopussy’ having found late afternoon snack and looking content was about to relish all those blooms nearby a home garden in Coolangatta, near Brisbane (above). “Even this Noisy Minor (Manorina melanocephala) could not resist checking out buds of new, fresh blooms just about to burst open (above). “Nor… the juvenile Blue-faced Honeyeater (Entomyzon cyanotis) for their nectar from the same tree (above).

“My information from Google surprisingly, mentions this native tree- Schefflera actinophylla to be known to grow as an epiphytic in 40feet tall rainforest trees in Papua New Guinea!

“Do join Avian Writer on an expedition trip to Papua (Irian Jaya), read how and why some flora and fauna known only to the Australian continent could also be found in Papua New Guinea (above). “Let’s find proof of an Australian Umbrella native tree existing in Papua New Guinea’s pristine primary forests for readers to decide if it was fabled to be epiphytically useful.

“Check out too who our next avian feeding guest was to be, who feasted on blooms of that ‘Octopus Tree’ that sprouted on its own… out of nowhere in the wilds of tough, thick, virgin, undulating terrain forests of this Asia Pacific region, where 39 known species of Birds-of-Paradise are known to live wild only in this part of earth… Papua New Guinea.” 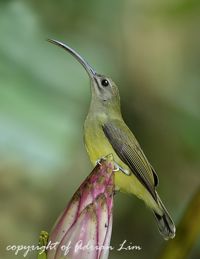 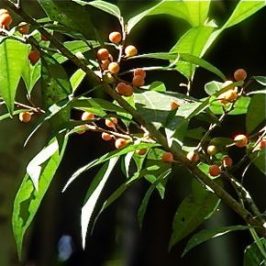 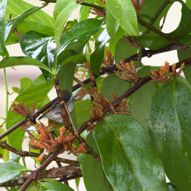