Our earlier post on the Grey Heron (Ardea cinerea) LINK attracted some discussion on whether the lump under its wing is a chick or a tumour. It was generally agreed that it is a tumour. Subsequently Dr Jean Ho, who is a pathologist, similarly agreed that it is a tumour, “though I cannot claim to be a bird expert.” So she sent the image and writeup to a veterinary surgeon specialising in birds for his opinion. Dr Chris Jewell replied: “From simply looking at the picture, I would assume that the heron had some kind of laceration. That kind of injury is not uncommon in bird that fly into, for example, telegraph wires. It looks like it’s on the point of the wing, which would give it a bulging appearance. Still, hard to tell just from a 2D photo.”

At the same nature enthusiast KF Yap requested a higher resolution image from Khng Eu Meng, converted the JPG image into TIF and then enhanced the image. His opinion: “The ‘beak’ is matted feathers and the flesh-coloured blob looks like an abnormal growth (left).”

So a tumour it is!

“When a flock of birds sense danger, have they been observed to fly in one... 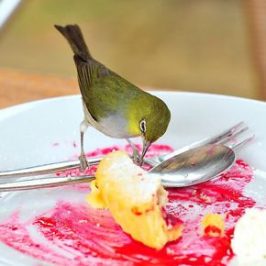