“Was at Sungei Buloh Wetland Reserves on Tuesday 18th September 2012 observing migrant birds which mostly consist of waders. However did catch sight of a Common Kingfisher (Alcedo atthis) nearby. “What fascinated me most was this Bar-tailed Godwit (Limosa lapponica) who was foraging for worms in the mudflats. Most of the time it did not use the full reach of it’s bill, as can be seen in the first picture where the mud was only halfway up the bill (above). However, in the second picture (below), the bird was pushing very strongly and deep into the mud, almost to the base of the bill. “I can only guess that the tip of the bill has some kind of sense faculty that allows it to detect food which is out of sight and in the mud. I would say that the sense faculty is electrical base, and not taste.

:The bill of the Bar-tailed Godwit is slightly upturned, and for the male, the bill has been measured at 85 mm, while the females are at 105 mm in length, females being much bigger in size.”

Lena Chow adds:
“Did some quick online research – waders and woodpeckers have tactile sensors, called Herbst corpuscles, in their bills for probing in water or wood for prey. Apparently in waders, these sensors are sensitive to differences in pressure; not movement, heat, smell nor electro-magnetic fields. Researchers did experiments where they hid little stones in sand, and these stones could be detected by knots used in the experiment.

“This is based on a hydro-dynamic principle : ‘When the bird sticks its sensitive beak into the sand at low tide, it produces a pressure wave because of the inertia of the water in the interstices between the particles. The pattern thus created betrays the presence of objects which are larger than the grains of sand. Knots are able to read the disturbances in the pressure field and perhaps even amplify it to some extent. The rapid up-and-down movements of the bird’s beak loosen the grains of sand, which then become packed together more tightly, displace the interstitial water and cause the residual pressure around the object concerned to increase – LINK. 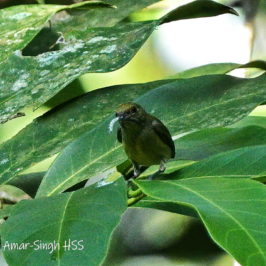