“Coney Island, formerly known as Pulau Serangoon, is located at Northeast Singapore. Separated from mainland Singapore previously, both ends of the island are now dammed up and connected to the mainland – forming two new fresh water reservoirs. Punggol Reservoir is on the island’s west and Serangoon Reservoir on its east. “Before 8 am on the morning of 28th July 2012, an unusual congregation of raptors was discovered on Coney Island. The surprised sighting was made when a few Brahminy Kites (Haliastur indus) were first spotted. From Lorong Halus Wetlands where I was standing, at least six kites, both adults and juveniles, were initially spotted. They were circling low above the water of Serangoon Reservoir. A solitary Grey Heron (Ardea cinerea) was also in flight near the kites (above). To my surprise, the kites were not going after the heron. I suspect that the adult kites were training their juveniles as they were looking down into the water (hunting for fish?). “More raptors were discovered on the opposite bank in the distant. Perched peacefully, these raptors were dotted on tall Casuarina trees that was on Coney Island. Counting from one of the images, there were at least fifteen raptors perched (circled in red) and three in flight (circled in yellow) (above). Three crows also appeared in their midst. “The raptors galore consisted of mainly Brahminy Kites (above), with probably two or three White-Bellied Fish Eagles (Haliaeetus leucogaster). The Brahminy Kites included adults, sub-adults and juveniles. I have visited this area many times previously, but have never seen such an impressive number of raptors. It was amazing to see so many wild raptors gathering peacefully, and most within mere metres from each other. I have no idea why these raptors were gathered there on that particular morning. It is possible that these raptors were roosting on Coney Island. Some images of raptors that flew within photography range attached to compare their plumage: Brahminy Kites – an adult (above left) and juveniles (above right), and a sub-adult White-Bellied Sea Eagle (below left). “As Coney Island is well isolated from human activities, wildlife inhabitants can be expected. Though the island is closed to the public, sightings of wildlife in the immediate vicinity suggested the island to be a safe haven for flora and fauna. Some of the not so common wildlife spotted included a flock of Great Cormorants (sighted Feb 2012) (above right), which flew above the island, and a family of Smooth Otters (sighted Aug 2012) that was swimming across Serangoon Reservoir towards the island (below). “Sadly, Coney Island has been earmarked for development. Although half of the island will become a Nature Park, the other half of the land will be used for recreation and residence. Any development, however small, will surely disturb the peace and tranquility of the natural environment and habitat of the current native wildlife on the island. It will be sad that the island is disturbed in the name of development. Places such as Coney Island, with its wild flora and fauna, should be kept as it is – undisturbed, and in its natural state for preserving wildlife and biodiversity.” 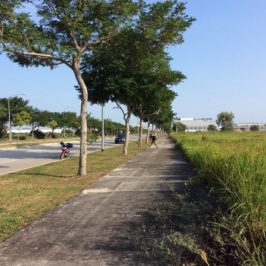 The casting of pellet by certain groups of birds is not too well known– see... 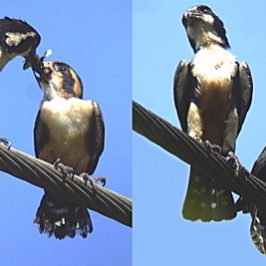