Through regular visits to a park in Amsterdam, Levina de Ruijter manages to bond with a resident crow. Whenever she arrives, the crow would come to greet her, following her around, sometimes coming close. Recently when Levina was photographing some young coots, the crow suddenly landed close by with a juvenile in tow. The juvenile suddenly ran towards a patch of grass and dived in, with wings spread and began to what appeared to be preening (above). Note that the eye is covered with the protective bluish nictitating membrane LINK. What it was actually doing was anting – allowing ants to swarm over its feathers to get rid of ectoparasites. This is one of the various methods birds adopt to keep their feathers in top form LINK. The image above shows the ants swarming all over its head. Suddenly it jumped up and ran towards another anthill (above) and dived in. It had its head among in the anthill (below), causing the angry ants to swarm all over it. It’s wings were spread out and vibrating (below). The ants were swarming all over the body (below). The juvenile was standing still, allowing the ants to do their work. The adult stood in the background keeping close watch. “At first I was a bit alarmed, now knowing what was going on,” wrote Levina, “but the fella was quite clearly in bliss! Having his entire eye, or just his second eyelid closed, pinching his eyes etc. Later, when I saw the images on my computer screen, I knew for sure: ants! In other words, he was anting, i.e. stir up ants so they get agitated and secrete some kind of acid [formic acid] that kills the bird’s parasites.”

Note: This account was first posted in the Canon Digital Photography Forum, Photography-on-the-net and appears here through the courtesy of Levina de Ruijter. 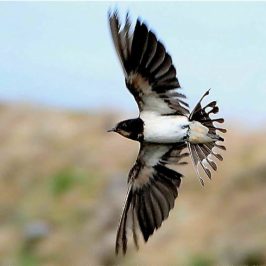