“I had noticed one of a pair of the Whiskered Treeswifts (Hemiprocne comata comate) was quite vocal when I entered this part of the forest reserve. But had not taken notice until I emerged later from a long walk much later. I then realised that courting was going on. “The above image is a composite of an adult male that flew in to where the adult female was perched to ‘woo’ her with some preening activities. Suddenly he was alerted to the presence of another male and took off to give chaseCourting behaviour of the Whiskered Treeswift. I had a tough decision – video, audio or still images. I decided on the latter as all these activities were rather high and fast. “The chase was a mad dash all over the open space above the forest canopy and lasted for 4-5 minutes. There was no real physical contact but many shrill calls, some close encounters and lots of ‘acrobatics’. I suspect the latter were to impress the female, much as some doves will do. At one point another swift came to check out the action and was ‘buzzed’ by both Whiskered Treeswifts. Throughout the female sat on her perch and seem to pay little attention.

“The calls made by the adult that ‘won’ the courtship battle can be heard HERE and HERE, the latter were the more ‘aggressive’ territorial calls.” 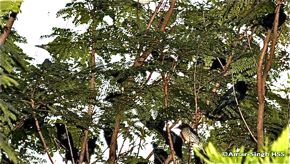 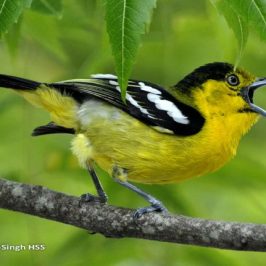 “My wife and I enjoy the Common Iora (Aegithina tiphia horizoptera) very much in our...