“The Little Tern’s (Sterna albifrons) main source of food is fish, which it hunts by flying over water bodies small and large. It is a delight to watch the Little Tern hunting for fish. Head stooping low and actively scanning the water below, its flight will slow if a potential prey is spotted. Its pace quickens again if it change its mind or the target has disappeared. If a suitable prey is spotted, it will hover in mid air to take aim at it before plunging down into water for its catch. It seemed to have a low success rate – often emerging out of the water without anything to show. In one instance, eight unsuccessful attempts were counted before it finally succeeded on its ninth. “I was charmed by the hovering action of a Little Tern just before it dives. Its beautiful wings were flapping furiously to keep it floating in mid air. Its tail was fanned out to control its hovering motion. As it hovered, I realised that it was not in a totally fixed position. This can be seen from the changing background in the images, each captured at about 0.3 seconds apart. Possibly, it was fine-tuning its hovering position in relation to its target below. It was also inching itself downwards to get nearer its target. Its wings were in rapid motion, but its head was stationary, stooped low with bill pointing vertically downwards. Obviously, it was in full concentration with eyes focused on its target below. Suddenly, its wings stopped flapping completely as it banked to execute the dive. The plunge was quick and it was straight down all the way. As it emerged out of the water, a fish was clamped in its bill. It was successful for this attempt, but not me – I lost focus of the diving action at that critical moment. “Regaining focus on the fast departing tern, I managed to capture shots of it eating the fish that it had just caught (below). Yes, this tern was eating fish in flight! It just gulped down and swallowed the fish as it flew away. Wow! This was the only time I have seen a tern eating in the air. I had thought that the fish was for its young as it was its breeding season and there were many instances of this species flying with fish in beak. 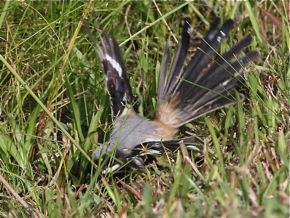 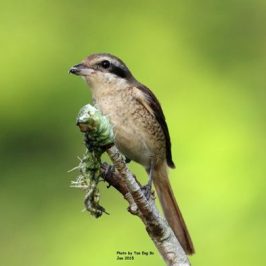