Raymond Poon send in two images of a female Olive-backed Sunbird (Nectarinia jugularis) feeding a pair of chicks in the nest. The images were taken at Pasir Ris Nature Park on the morning of 8th July 2012. According to Raymond, the top-left image shows the adult “…feeding the chick with what looks like a tiny hermit crab. Though tiny, the prey appears too big for the chick to swallow. However, after some coaxing from the parent bird, it finally managed to swallow it. Can anyone confirm that it is indeed a hermit crab? I thought sunbirds eat only caterpillars, tiny fruits, insects and of course nectar.”

NOTE: The enlarged images on the left is not clear enough to confirm that the prey is a hermit crab. Anyway we would appreciate comments… 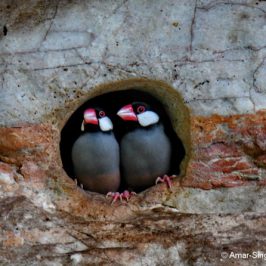