“The ability to learn is not limited to humans. In the wild, animals including birds acquire survival skills from learning. One key reason for advising against rescuing young birds LINK is that young birds will need to learn, and learning is mostly done by watching adult birds who cared for them during the beginning of their lives. Humans cannot replace the avian parents. Learning through their own experience may incur more time, and cause pain or even death. A juvenile Grey Heron (Ardea cinerea) had a painful learning experience that it will probably remember for life when it caught a prey that was too much for it to handle. The prey, a fiddler crab, inflicted pain on the inexperienced juvenile by pinching its tongue. “A flock of mainly Whimbrels (Numenius phaeopus) was foraging amongst the vast area of exposed sea weed on a mudflat during low tide. A juvenile Grey Heron, some distance from the flock of Whimbrels, was foraging alone (top left). It found a fiddler crab and caught it between its mandibles (top right). Just a brief moment later, its mandibles were opened. The crab was seen clinging onto its lower mandible (above left). It must be painful as the juvenile instantly reacted to get rid of the crab. Twisting its neck, a forceful flick was executed in the opposite direction (above right). Its mandibles were opened wider but the crab was still hanging on its lower mandible. “Failing its first attempt, the juvenile recomposed itself (above). Its next flick sent the crab flying into the air. The tiny crab soared higher than the juvenile before landing a short distance away (below). The force of the flick caused the juvenile to spread out its wings for balance. No doubt that the juvenile had learned its lesson as the prey was abandoned.” 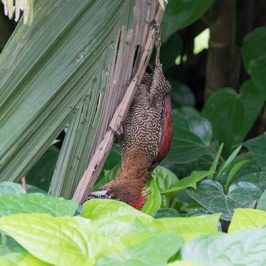