“Kingfishers are known to bathe by plunge-diving into water. So far, all episodes of kingfishers bathing that I have witnessed had occurred only in fresh water. Hence, I was pleasantly surprised to have my first sighting of a Collared Kingfisher (Todiramphus chloris) bathing in sea water. “When first spotted, this kingfisher was perching on a rock on the shoreline. Droplets of water were visible on its head and the saturated colour of its plumage gave me a clue that it was wet. Before I had time to react, it took off unexpectedly to plunge-dive into the sea. The diving spot was about six metres from the rock but only about three metres from shore. Emerging out of the water after a mere one second in water, it was quickly back to its original perch. “After missing the earlier action, I scrambled quickly to prepare for its next series of action. The pictures attached were captured during its next plunge. Heavily cropped, these helped to zoom in closer to the action. The continuous shots, all taken within a four seconds period, showcased the kingfisher’s flight towards the diving spot, the use of its wings and tail for speed reduction upon approaching its selected diving spot, head drooping downwards just before its plunge, the orientation of its body immediately after the plunge and entry into water (please note that its body had made an about-turn), head emerging above surface of the agitated water, breaking out from the water surface, its return flight, and after landing on its perch. “Seconds later, the kingfisher flew inland to disappear from sight; leaving no further chance for observation. “Pardon me for my ignorance. Will crystallisation of sea water into salt on the plumage create problem for the bird? Or does the kingfisher then take another fresh water bath to get rid of the salt?” 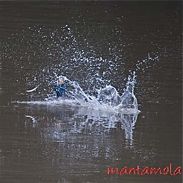