“Earlier this month (April 2012), I had an encounter with a family of Red Junglefowl (Gallus gallus) hen and her five little chicks. The hen was an old acquaintance that I had met a few times and had been featured in an earlier posting LINK. “Previous encounters with chicks of the Red Junglefowl were often very brief affairs as they were skittish and quickly took cover when aware of being watched. I was in better luck this time as they chose an open spot for a short rest. They were aware of my presence as I was in the open with nowhere to hide. However, my presence seemed to be accepted as they were quite comfortable and at ease. In between bouts of resting, they were preening themselves; eyelids often closing as they turned their heads to reach towards their hinds. The mother was standing guard for her chicks as they indulged in comfort behaviour (above). “Visually, Chick “A” (above left) was the outstanding one with its mostly white plumage. Except for a tinge of orange on its head and body, it was white with no markings or patterns on its plumage. Is this chick considered leucistic?

“Chicks “B” (above right) and “C” (below left) would seem to be the typical plumage for a Red Junglefowl chick. My previous sightings of chicks were similar in appearance: buff-coloured faces with dark eye stripe, dark-coloured bar and speckled patterns on wings, and a distinct crown stripe. Both chicks were almost similar but can be separated and recognised by their subtle differences in plumage colour. Chick “B” was with slightly lighter-coloured plumage compared with Chick “C”. They can also be differentiated by the markings on their crown stripes. “Chick “D” (above right) possessed the darkest plumage, which was mostly dark-brownish. It did not have much markings on its body. Its neck was almost black. But it had the broadest eye stripe amongst the chicks. “Chick “E” (above left) was more saturated in colour. It had a chestnut-coloured plumage. It lack the typical markings including crown stripe. However, it had an eye stripe though it was barely visible. [The above right image shows two chicks preening.]” 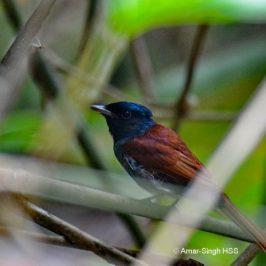 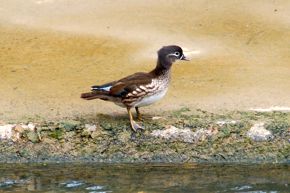 Meibao was walking to the bus stop opposite the National University of Singapore Bukit Timah...