“On 28 Apr 2012, I made a repeat visit to Lorong Halus to check on the Javan Pond-heron (Ardeola speciosa) that had developed breeding plumage. This individual had been in the vicinity since mid-February 2012 and had been photographed by many photographers. The Javan was not there that day. The migratory species that were normally seen there were gone too. The recent hot weather could have triggered these migrant species to get back on their return journeys. Disappointed at first, my disappointment turned to excitement when a solitary pond heron with an unusual plumage was spotted (above). The plumage was neither the familiar Chinese nor the rare Javan. I managed a few record shots before the bird flew out of sight; spooked by an approaching passer-by. Could this be an Indian Pond-heron (Ardeola grayii)? “Based on that description, this pond heron matched the Indian except for the white head plumes, which were not visible (below left). “Images of the 3 species are attached for comparison. Please note part of the bill turning blue for both Chinese (below left) and Javan (below right) pond-herons. The Indian Pond-heron (if ID is correct) may be at an early stage of breeding plumage as it still lacked the blue in the bill. The absence of head plume could be due to it being hidden from view or it may not have developed. Images of the Javan were captured on 26 Mar 2012 while those of the stationery Chinese was captured on 6 Apr 2012. “How many species of pond herons can a birder see in Singapore? The answer, many years ago, used to be: only one. Since 2007, the answer has changed and increased to two. In the not too distant future, the answer could well be three.” 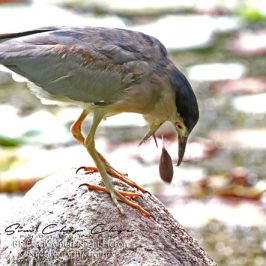