“A bird study retreat came with many surprises end of March 2011. Apart from a peaceful ambience of a forest resort to invigorate in, there were enough flora and fauna activities to keep occupied and to sharpen my digiscopic skills. “As I sipped an after-lunch coffee and relaxed in my chalet balcony, I noticed a pair of Large Woodshrikes (Tephrodornis gularis) busy nest building on a horizontal durian tree (Durio zibethinus) branch about seven metres off ground.

“A male was observed to be sitting inside nest, while the female on the right was collecting more nesting material (left).

“My viewing angle by binoculars was forty-five degrees and my immovable, solid, wood armchair was just over five metres from the nesting branch. Great views, but I had to remain very still, played dead with the armchair so as not to interrupt parental nesting activities.

“For possible photography, I had to set up my Fieldscope farthest end corner of the balcony, just over 6 metres away and wished there were more room to be had to keep my observation distance and standing space for my tripod. I was feeling most uncomfortable observing under such manner but that’s just about the nearest I would allow myself to get close to any nesting activities if permitted only by parenting birds. “An early afternoon romance issued between the pair as I observed one to be mounting the other over their unfinished nest. It was also a treat opportunity to view its signatory white-rumped band (above left).

“The male was observed to be crouching over the female, few seconds longer as compared with other species of birds (above right).

“Was it copulation or just playful acting or sending a tutorial message to a first timer female? As in the past, most of my breeding birds’ observations had copulation done with and out of the way before nest building actually began.

“Or, do Large Woodshrikes copulate before and also during nest building?

“Image (below left) shows a female bird with horn brown bill sitting in to get the feel of a cup shaped nest and size just right. “Image (above right) has the male bird with its powerful black bill sharing nest building responsibilities. He too was plastering the nest from inside out.

“Image (below left) shows a close-up view of nesting materials collected by the nesting pair.

“Together with image (below right) the busy male with webs over his head was observed to be trying to weave wrap and hold the cupped nest in place. “For a small-medium sized bird of 18.5-22.5cm, reproducing their young on a precarious, shallow nest branch is akin to humans trying to build live on the edge, hanging on for dear life … cliff hanger style!” 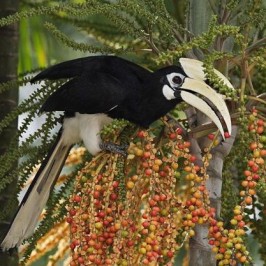