“Dusting out my bird gallery like a wine cellar, I picked a suitable subject to compliment the breeding series. My finger tabbed the keyboard like a dowsing stick and it chose an image of an azure, male Black-naped Monarch (Hypothymis azurea) to share write the joys of parenthood.

“The image recalls a birding trip end of March, three calendar years ago when I walked a birding trail of mixed secondary forests on either side. A female caught my eye. The small-medium, sized bird was vigorously fanning over a semi-finished nest with her wings and tail (left).

“I wondered why. Was it an expression, a feeling of excitement and perhaps… pleased with parenthood, her nest construction progress or fanning a newly laid egg that couldn’t wait?

“The nest was constructed on a Y-fork of a tree branch just above eye-level. It appeared incomplete and entwined with pieces of fresh fern species, twigs and dried straw-like materials. I was not sure what that piece of white matter in her bluish beak was (below left). “My trip nor site location did not permit the minimal required time to monitor the whole nesting process. I decided to permit myself a couple of documentary shots from a distance, left the bird to get on her business of nest building and moved on with other observations.

“The next day on passing through around noon, a quick glance with my Fieldscope showed good progress made to the nest. It was further embellished with white, fluffy materials. The nest appeared to near completion.

“The female, standing over the nest was observed to be calling out vigorously. The two syllabled calls were distinctively heard (above right).

“The calls were heard and her mate appeared five minutes later. The male was in resplendent, azure plumage. The light-blue colour of its eye ring and the thick-like matching bill reminded me of my fondness of the Black & Yellow Broadbills (Eurylaimus ochromalus).

“The black contrasting skull cap, a black band on the upper breast and black base of mandible makes this attractive and photogenic bird simply so different from other bird species with blue plumages. It qualifies him a class of his own under free standing category (below left). “The calls I later discovered was an errand run. While the gleaning, insectivore male was away for 13 minutes, the female appeared to be playing the dominating role in nest building and continued to provide the finishing touches to the nest. Occasionally she was seen to show her Fantail-like shaped tail and sat in to check nest for size and comfort (above right & below left). “Cobwebs were also used to hold and strengthen the nest (above right).

“One chance opportunity to get to know bird species better is, to make a point to read the subject matter in my ‘Bird Bibles’ and do some comparison check prior to putting my own field observations in writing. “I sat up when I came across a text from ‘The Birds of Thai-Malay Peninsula’ Vol: 2 page 168 by David R. Wells that reads, (May I conveniently partially quote for those who have not acquired a set yet) – “Both parents….only female …proven…. nest …ld”

“Perhaps… this 21st century male has proven, he was not just an errand partner after all but a creative nest interior decorator, providing the dutiful role of finishing touches to begin parenthood in style. 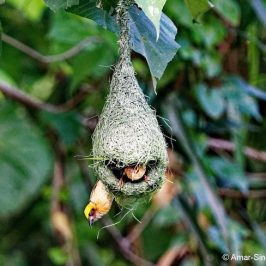