“Saw a Spotted Dove (Streptopelia chinensis) in the usual sunning posture under the mid-day sun (see attached image). After a while it stood up, and surprised me with some unusual movements when it moved the neck and flicked its head 4 times in quick succession. With the mandibles wide opened, it looked like it was trying to regurgitate. And with the flicking movements, it appeared as though it was trying to get rid of a pest from its head. It then stopped briefly to scratch the right side of its head and continued with the neck-head movement one more time.

“Because of limited resolution, repeated viewing of the recorded video – frame by frame – could not verify whether there was anything regurgitated. Neither was there any sign of flying insect around the head.

“The video, recorded on 29 Jan 2012, with the sound track cleaned to remove traffic and digitisation noise, can be viewed above.

“Would anyone care to venture a guess of what the bird was doing?” 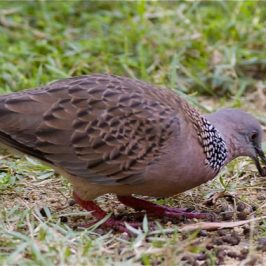 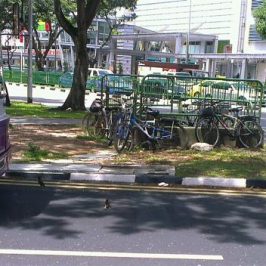 “This picture, taken today at Velocity junction. Less than 100 m from...