“I was lucky to be close to the action when a Long-Tailed Shrike (Lanius schach) was doing its work: catching a caterpillar. “The Long-Tailed Shrike was first seen perched on top of a lamp post. The action started when it descended onto a grassy patch. I was anticipating some fast action but it turned out to be slow. It just stood there for more than a minute; merely staring intensely into the grass patch, and occasionally turning its head; as if to adjust its vision. It shifted position a few times, still staring into the same spot. It took a sudden plunge with wings spreading and tail fanned out. When it emerged, it had nothing to show. With wings still spread and its long tail cocked up, it continued its stare (above). “It was probably another minute later before it tried its second attempt. It was still unsuccessful. At its third attempt, it finally caught its prize from the labyrinth of grass blades (above). Immediately, with prey in beak, it flew several metres away. When it landed, it proceeded to bash the prey against the grass. “I was expecting a skink from the grass. But after the fast blurry action, I caught sight of the prey. It was a large brownish caterpillar with intriguing patterns (above). The caterpillar was still in perfect shape even after the punishing bashing that it received. Probably, the grass was too soft or the caterpillar too tough. The Long-Tailed Shrike then flew about thirty metres away to bash it against a tree branch. By the time I rushed there, the caterpillar was already well bashed. Its gut contents was leaking out from its body. The blackish fluid can be seen (indicated by red arrows in one of the images) curled around the thin stem (below left). “For reasons unknown, the caterpillar had somehow got curled around the bill of the shrike (above right). It was not known whether this was manipulated by the shrike or was a reflex action of the dying caterpillar. “The shrike then manipulated the prey to unwrap its prize from its bill before it could be consumed (above). After a satisfying breakfast, the shrike cleaned its bill by wiping on the stem. It appeared to be ‘smiling’ with its partially opened bill just before it made its departure.” 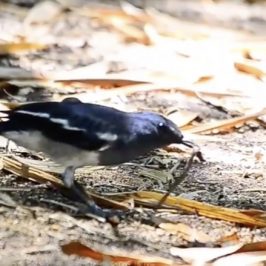