“We were walking along Jalan Ubin on 6th Feb 2012 when fellow Ubin volunteer Alyce Ang spotted something on a yellow stem fig (Ficus fistulosa). Upon taking a closer look, I realised that it was actually a scops owl. While we noticed that it looked different from the more commonly seen Collared Scops-Owl (Otus lettica), it was only after I reached home and checked the guide book then I found out that it was an Oriental Scops-Owl (O. sunia), with its yellow eyes (left).

“When we first sighted it, it got into a tall and thin posture – something which I had previously only seen on videos and pictures!

“But after observing us for a while, it probably felt that we were not going to cause it any harm, and relaxed a little, giving it a somewhat slightly bloated appearance (below left). Eventually after some time, even the ear-tufts were flattened (below right). “It soon lost interest in us, turned its head and looked away from us.”

Note: Check out the links to our earlier posts below. 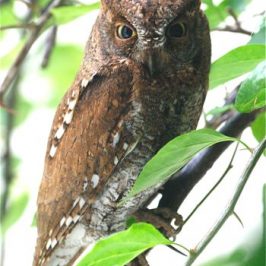 Melissa Ong was ecstatic when she learnt that her mom had a close encounter with...