“According to Wikipedia, the Little Bronze Cuckoo (Chrysococcyx minutillus), at 17 grams and 15 cm, is the smallest cuckoo in the world. This species can be identified by its greenish bronze upperparts and barred underparts. They have eye rings, which can be used to distinguish males from females. The male has a bright red eye ring (above) while the female has a less prominent dull yellowish eye ring (below). This species is considered a common resident in Singapore. They are, however, not easily observed as they like to forage high in the canopy. “A pair of Little Bronze Cuckoos was recently encountered. The female was discovered perched on an exposed branch at low level. She was relaxed and not particularly active, duly obliging to be photographed by a few photographers who happened to be in the vicinity. In contrast, the male was quite a challenge to photograph as he was hyper active and barely remain still for even a short moment. He was busily combing through the dense foliage. “Although relatively stationary, the female was first to find a prey. A colourful insect that appeared to be some kind of cotton stainer bug was caught and clamped in her bill (left). She did not bash it before swallowing like what some species have been doing. Instead, the prey was shaken only very briefly and then quickly sent down her throat. Meanwhile, the male was making soft calls every now and then. Was he keeping in contact with the female? Or was he sweet talking to her? For they were not always in line of sight of each other due to obscuring foliage.

“Eventually, the female became more active as she shook off her lethargy. There was sudden excitement as she darted high into another tree several metres away where she was met by the male. Straining our eyes to see against strong back light, we could see that the male had caught a prey, which he offered to the female. The female accepted his gift eagerly. The prey was swiftly handed over to the female who wasted no time in gulping it down. Regrettably, the action happened all too quickly for any photography. Having to move my eye away from the viewfinder to see where the female had landed, the camera was not ready for action. By the time I caught sight of their position, it was too late. The courtship feeding had taken place, but not captured in my camera. 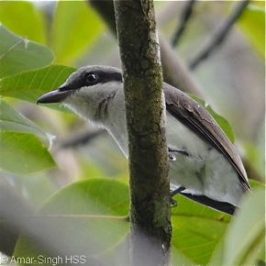 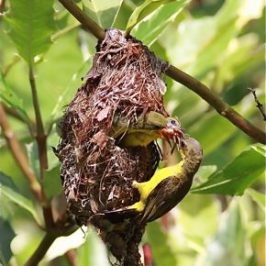 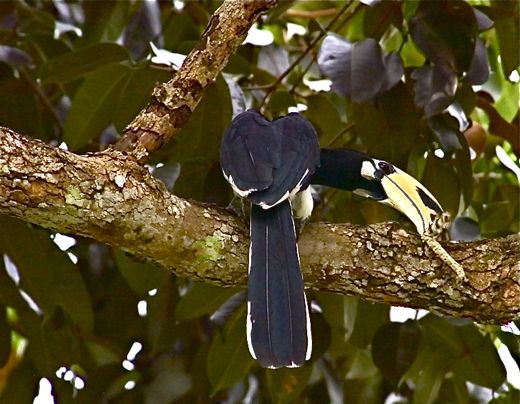 In March 2008, Allan Teo sent in an image of an Oriental Pied Hornbill (Anthracoceros...