“The Blue-crowned Hanging-parrot (Loriculus galgulus) left a parable behind as he flew off for man to perhaps learn the creed of not being greedy- by only taking what was needed for sustenance. He was also a neat eater, not wasteful neither nor destroyed the rambutan (Nephelium lappaceum), rendering the fruit not serviceable by those that came after him LINK.. “Within a minute of the parrot’s departure flight, the awaiting and opportunistic sunbird flew in to inspect the rambutan (above left).

“This is definitely not a symbiotic arrangement but one of opportunity.

“The image of the Brown-throated Sunbird’s small bill (above right), though a bit straighter than her cousins, is not adapted for peeling. Instead its tool is more designed for probing and sipping nectar and perhaps… with limited capacity to collect food in small bits (below left). “(I have turned the images above around to see the bird better, though making the stoned fruit to appear in horizontal levitating position).

“The above image (right) shows the 14cm sunbird enjoying a feast of the fruity flesh.

“Having had her fill, the sunbird too left the remnant rambutan behind to await yet another third visitor- a wasp looking insect (left).

“The Brown-throated Sunbird then flew around prospecting the fruit tree for opportunities. Eventually, she located a sunburst fruit with flesh already exposed, to enjoy a dig-in sip of yet another serving of sweet rambutan juice of nature’s providence (below). 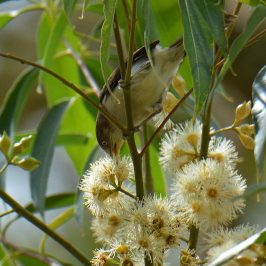 “The New Zealand Pigeon (Hemiphaga novaeseelandiae) is a rather large bird, ~ 50 cm long,...