“Oriental Pied Hornbills, southern race (Anthracoceros albirostris convexus) are a common sight around and within the Celestial Resort on the south-western end of Pulau Ubin, Singapore.

“I spotted a lone hornbill perched on a H-shaped wooden stand by the water’s edge on Wednesday 27th December, 2011. I did not notice anything unusual until I viewed the photos later. “When it opened its bill while basking in the sun, I saw the silhouette of the extra lance between the upper and lower bills, and thought ‘what a long and stiff tongue it has!’

“A good look at my photos revealed to my surprise that it had an extra ‘lance’ protruding from its bill, just in front of its right eye (above left).

“I had only a compact camera with 12x zoom and did what I could to capture the hornbill. It was totally relaxed and I thought I could return to the site with KC Tsang who had a large telephoto lens on his DSLR camera. Alas, we did not have another opportunity like that. However, we did spot the same bird when it was participating in a grand fly-past with over 20 other hornbills later in the evening. Instead of flying high overhead with its friends, it came down and perched on a lamp-post, just long enough for us to see its spectacular lance through binoculars. KC Tsang was not able to get a shot at it, with lower foliage in the way, and it took off too soon.

“Here is a short video of it getting some sun after several days of overcast sky and rainy weather.” 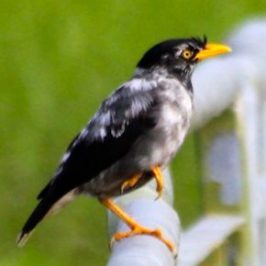