“The Red Junglefowl (Gallus gallus) is widely believed to be the wild ancestor of all domestic chicken. Red Junglefowl roosters are quite an eyeful with its brilliantly coloured plumage and showy arching tail feathers. Red Junglefowl hens are less eye catching. Their plumage are duller and less fanciful (left).

“An adult pair with two immature were encountered recently. The hen had an interesting plumage of dark chocolate-brown with contrasting scale patterns seen on its front and sides. Except for the front of its neck, the feathers from crown to mantle seemed black. Compared to some of the other Red Junglefowl hens in my collection of photos, this plumage seemed a little odd. The colour of the feathers from crown to mantle will usually appear as golden-brown to yellowish-brown; never black. “There is much speculation about hybridisation between the Red Junglefowl and domestic chicken. The difference in features shown in the hens could be due to hybidisation. The male Red Junglefowl has an eclipse plumage after breeding. Is there different plumage for breeding and non-breeding females?” 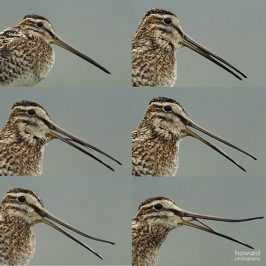 Our introduction to rhynchokinesis was based on the feeding behaviour of the Common Snipe (Gallinago...