“Sometime ago I was sent a YouTube link on an owl that is capable of transforming into three modes: LINK. The video features a White-faced Owl (Ptilopsis leucotis) encountering two other owls of different sizes. When it encounters a Barn Owl that is slightly larger than itself, it would puff itself to enlarge its size. I am familiar with many other species that would attempt to do that, by spreading its wings to ‘enlarge’ itself. However, the surprise comes during the second part of the video when a much larger owl, a species of Eagle Owl was brought forward. Seeing that this owl is much too big, it chooses not to confront it but rather makes itself appears thinner and smaller, so as to escape the attention of the large threat. This behavior is described as ‘concealing behavior’ that is well documented in smaller owl species when threatened (Denver et al., 1990).

“The concealing behavior is achieved by facing the threat sideways, revealing the narrowest profile to the threat. Besides this, it will attempt to keep its face feathers flattened to create a thinner face. It will also partially close its eye so that it will not attract attention. With its dull coloration, these strategies will effectively help it to disguise itself as a thin dead branch of the tree it is perching on (the tufts in some species further help to create this illusion), similar to the practice by some distantly related nocturnal species of Caprimulgiformes, such as nightjars and frogmouths.

“On 25th September 2011 when I was doing my regular birding in an oil palm estate around my neighbourhood, a nightjar caught my attention. While attempting to get a day shot of it roosting, I walked through the overgrown parts of the oil palm with no success. Filled with disappointment, I suddenly noticed some black clumps in the shade. I took it to be a leaf that looked like an owl, something that had happened to me on many occasions when I thought I saw an owl from far, but would turn out to be something else. I was wrong this time. It was a Brown Wood-owl (Strix leptogrammica maingayi) sitting quietly on the branch. This was exciting for me as it was the first owl I had ever seen in my neighborhood within the last 13 years of birdwatching, and after having heard owls calling four times from late last year to early this year at two other spots. One of the calls I heard earlier was in fact of this species from a limestone hill habitat. This species is more commonly sighted in forested habitats from lowland to highlands in much of its range. It was also recorded in an oil palm estate in Borneo (Phillipps & Phillipps, 2009) – usually not known to enter oil palm estates. “I made a video of the owl on tripod to capture the moment that included seeing it give its diagnostic eye blinking. When I processed the video, I was surprised to find that I documented the owl slowly moving its body to present a more concealing posture, to become more concealed towards the end of the video. It may have been because it saw me walking towards it that it started to conceal itself. This is an interesting behavior showing that large owl species like this wood-owl would also use this technique when it faces threats but it did not conceal itself as rapid as the scops owl. When I left, it had not fully concealed itself, so it is uncertain to what degree it would. I was forced to leave the location after taking the video as I noticed some local bird poachers who were regularly coming to trap doves arriving. I quickly left the spot so that they would not notice that I was looking at an owl.

“Along with the article, I attach a picture that was extracted from the video to show the slow change of the posture (top) and a higher resolution static image of mine (above-left) 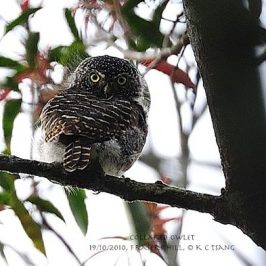