Introduction
“The area of bird watching and photography have undergone much change over the past four or five decades, especially with the use of technology. There has been some discussion on this site as to what are the best media to document bird behaviour. Some have been advocates of video recordings, others take pleasure in capturing the most beautiful image possible, while some are fascinated by the science of it all. I would like to briefly discuss the many modalities to document bird behaviour and offer my opinions on the subject, not so much as to say which is better but to suggest that all have a place.

‘Basic’ Bird Watching
“The foundation of observing bird behaviour is watching, often without the aid of any instruments. Yes opticals help but can also be a hindrance. In human research there is a phenomenon known as Hawthorne effect, i.e. when we observe someone and they know we are watching their behaviour, then that behaviour often changes. This is also true of birds. Our mere presence alters their behaviour. We could argue that long lenses and digiscoping allows undisturbed observation, but we all know that the keen eyes of birds makes them aware of us even from far distances. Birds are very sensitive to something pointed at them, even a pair of binoculars. Basic bird watching has been the bed rock, the foundation of so much of our past knowledge on birds. Today insufficient time and energy is taken to just sit quietly and watch. Allowing birds to become accustomed to our presence or using a hide. Another issue here is the tendency to ‘demand’ some digital evidence to back up naked eye observations (with or without binoculars). We seem to be less trusting of observations made without some ‘evidence’. Yet in my experience some of the most important observations I have made are of this nature.

“An example of a recent observation that no camera or digital device can record: On 22nd August 2010, I observed the courtship battle of the Savannah Nightjar (Caprimulgus affinis).

“We (my wife and I) were out cycling and, at 6.40 am, not far from our home and close to the Savannah Nightjar nesting/roosting site we heard repeated calls of this nightjar. The Savannah Nightjars are generally quiet but I have head occasional calls at night at our home. I have also heard calls when watching at the nesting/roosting site but these are usually single and uttered out of concern at my presence. It is documented that they do call loudly (Wells 1999) but the function is unknown. We stopped and spotted three Savannah Nightjars in flight, circling around. One was chasing another and the third was following the first two. The adult chasing was calling out repeatedly as it chased the first bird all over the neighbourhood. It appeared to be a ‘fight’ over a female (the third bird following). Lighting was limited but I could see tail feathers well enough to distinguish male and female. By the way the second adult was chasing the first, with the third following, it did appear to be a ‘fight’ for a mate.

“I do think this was territorial as I have seen them repeatedly roost/nest very close to each other. We watched for a while and when we left the activity had not ended and the bird was still calling out continually and the chase had not ended.

Bird Photography (Stills)
“The digital SLR revolution has put reasonably priced cameras and long lenses in the hands of many individuals. We have an explosion of bird digital images that document much about birds. Some are well catalogued in online databases, others scattered in numerous image posting sites. Digital photography has an important place as it allows sharing of images in many spheres, including photographic print bird guides. Beautiful images can also play an important role in capturing the imaginations of the ‘lay public’ and galvanised action to save the environment. No necessity to give examples here.

Digiscoping
“This is a wonderful medium discovered by the late Laurance Poh who lived in Ipoh (a friend to many of us). He perfected the art of taking close up images using this mechanism, but scopes have long been used to watch birds with limited disturbance or gain access to birds far off. The photography aspect of digiscoping requires a bird that is relatively stationery and good lighting. Digital image processing software is needed to help with the final image. The final output is like still images but at times breathtaking in clarity.

Video
“Good video recordings of birds are a wonder and delight. I am sure many of us have been thrilled with what has been revealed by painstaking work to document unusual behaviour of birds. A recent example that has impressed me (The Oriental Honey Buzzards of Ninety-nine Peaks) is here: LINK.

“Currently serious work requires a good tripod. This modality is growing and will blossom with time as the equipment gets more portable, has better opticals and better image stabilisation. To a point I suspect where handheld work may become normative (see new modalities below). A variant of this is the 24 hour video surveillance of rare nesting birds available on the net.

Merged images, composites and software
“Although the video is a great format to record and share behaviour, it has limitations in some circumstances. Especially with fast moving birds, sudden events where there is no time to set up, the necessity of a tripod for steady images, etc. At times an interface between still images and video can be obtained by using multiple still images of the same event and making a composite – either as stills merged into video format, giff format, merged images and images just placed side by side.

a. A video where sequential still images (many of them) can be put together and made into a video. In the example LINK, still images of Peaceful Doves (Geopelia striata) mating, were merge into a video using Ulead VideoStudio 11. I provided a two second pause with each image to allow a view of the action.

b. Using gif animations. The freeware “GIMP” is good for this. In the example on the left, still images of a Little Heron (Butorides striata) calling out have been made into a gif animation.

c. Merged images to show action, Adobe Photoshop is good at doing this. In the example (below left), five still images of a Blue Nuthatch (Sitta azurea expectata) have been merged to show rapid foraging behaviour.

d. A simple stitched together composite (a few images joined side by side, for example), The freeware “Iranf View” is great at doing this. In the example below, four images of the Ruby-cheeked Sunbird (Anthreptes singalensis singalensis) have been joined to show foraging (below right).

“In most of the situations above, there was little time for video and work was all done handheld. The last three of these can still be shared easily in digital form with small file sizes. Audio recordings
“Audio recordings of bird calls are an underutilised modality. It forms an important tool that can help identification of birds in the field as well as analyse and understand bird communication. Many digital cameras and video recording equipment automatically can record sounds as part of the video, even if the bird is not in the image. The audio component can easily be ‘stripped’ out and processed. ‘Audacity’ is a great freeware that allows for complex manipulation and sharing of audio recordings. We definitely need a comprehensive database of audio recordings that will aid each other in recognising bird calls. Of course having specialised bird call recording equipment would be ideal but I am writing here for the average bird watcher like you and me.

“An example of calls: LINK. Also a composite of audio recordings of calls of the Chestnut-naped Forktail (Enicurus ruficapillus), with the background rushing stream noise suppressed, and calls amplified HERE.

Newer Modalities to Come
“Two new exciting developments that have turned up are the Lytro camera and the recording binoculars.

“Lytro LINK, is a Light Field Camera. Right now in its infancy, however it has great potential. Unlike a conventional camera that captures a single plane of light, the Lytro camera captures the entire light field, which is all the light traveling in every direction in every point in space. The advantage is twofold. Firstly that you focus after the fact. You can focus and re-focus, anywhere in the picture. You can refocus your pictures at anytime, after the fact. And secondly that focusing after the fact, means no auto-focus motor (no shutter delay, so capture the moment). What a wonderful technology for fast moving creatures like birds.

“The Sony DEV-5 is a digital binoculars with Full HD recording capabilities, in stereo sound LINK 1 and LINK 2. Again allowing capture of the moment we are watching.

Final Comments
“These have been some simple rambling on my part. I hope they have been useful to others and I welcome ideas. I hope others will add their comments to enrich our appreciation of birds and nature.” 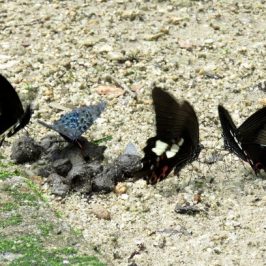