“Following the discovery of a Red Junglefowl hen (Gallus gallus) on Sunday 9th Oct at Sin Ming Ave, I went there the next day hoping to see it again LINK.

“On arrival, I was greeted by the familiar ‘cock-a-doodle-doo’ call from a hidden cock instead. Then I saw two young adult males nearby foraging together. What struck me during my observation was their raised and spread tail feathers whenever they had their backs facing me. In addition, they would also wave their two long showy tail feathers in opposite directions. The movement of these long feathers didn’t look like it was caused by the wind but more likely to be done deliberately. I wonder what is the significance of this behaviour?

“An edited video of the waving tail feathers can be viewed above.

“Another video with one male and two females, which shows evidence of feeding by residents, can be viewed here:

“From what I saw there were three males and two females. I can confidently conclude that there is a breeding community here.

“…To observe the birds further, I went to the location again on 15th Oct 11. When I arrived at the destination at about 9 am, none of them could be seen on the ground. After some time, I heard the familiar “cock-a-doodle-doo” again. Looking for them high and low, I found one juvenile/immature in a tree. Eventually, four juniors (attached image showing one with a clear view) and one adult male in the same tree were discovered.

“While they were in the tree, they spent most their time, well what else, on preening. One was seen with a big yawn too. This apparently is a common behaviour seen in other species of birds also.

“The sighting of the junior prove beyond any doubt that there is a breeding community at this location.

“An edited video of some of the juniors (take note of the half-closed eyelid or nictitating membrane while they were preening) in a tree can be viewed below:” 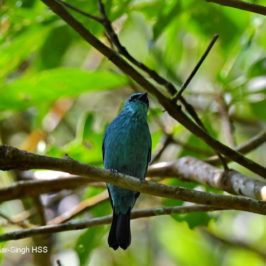 “I saw this ‘blue’ Flycatcher calling high in the jungle canopy. There were two birds...