“I was at the Sin Ming Avenue, a short distance away from my home, on Sunday morning (9th October 2011) to enjoy the beauty of the Heliconia densiflora ‘Fire Flash’ (left). It was the first time I came across this cultivar then. I am not sure whether it is planted elsewhere in Singapore.

“This ‘Fire Flash’, together with many other ornamental ones, were planted by NParks as part of their Community Garden Program along some stretches of the road.

“After a while, I was surprised to see a female Red Junglefowl (Gallus gallus), accompanied by a lone Spotted Dove (Streptopelia chinensis), foraging in the shade of a banyan tree (Ficus sp.) in the vacant land just next to the Flame Tree Park condo. The last time I saw Red Junglefowls nearby was in 2005. Back then a free ranging cock, together with its harem, were kept as pets by a temple caretaker. The birds would roost in a mango tree inside the temple compound. He gave them away after the Govt imposed a ruling not allowing more than 10 caged chickens to be kept as pets. This ruling was introduced as a preventive measure again the bird flu. There was a Channel News Asia report on 4th June 2005 about the birds that ‘At Adelphi Park off Upper Thomson Road, residents say the wild chickens have been with them for some 50 years now. And the chicken population here is a thriving one, too. The birds even lay eggs now and then in flower pots…’. For those who are unfamiliar with the area, Adelphi Park is not far away from the Sin Ming Ave.

“As I tried to get closer to the Red Junglefowl, the Spotted Dove, as expected, took refuge in the safety of the banyan tree, while the hen move away maintaining a ‘safe’ distance from me. With the crows making a nuisance with their non-stop cawing shortly after my appearance, the Red Junglefowl decided it was time to leave the scene. It made a short dash, flew over the four-lane road to the other side while making the typical distress call and disappeared into the covers provided by the roadside garden.

“An edited video, which also showed the bird taking a prey that looked like an earthworm or a centipede, can be viewed below.” 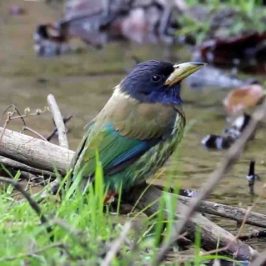