The Violet Cuckoo (Chrysococcyx xanthorhynchus) has been reported earlier to vigorously swing caterpillars clamped tight between its mandibles to kill them as well as to rupture the skin so as to get rid of the stomach contents LINK.

According to Payne (1997), cuckoos are mainly insectivorous. They specialise on the noxious, brightly coloured and hairy caterpillars that are generally avoided by other insect-eating birds. Despite their efforts at removing the hairs of the caterpillars before swallowing them, the stomach of these cuckoos are often lined with such hairs. 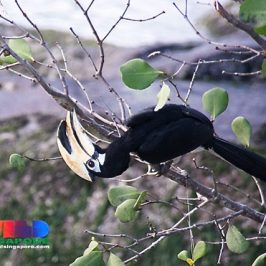