“A flock of more than a dozen Asian Glossy Starlings (Aplonis panayensis) was feasting in a few small trees. There were plenty of tiny fruits that looked like miniature durians, which the starlings swallowed whole (below left; bottom right). Each fruit was probably less than 10 mm in diameter. “The Asian Glossy Starling has bright red eyes, which contrast sharply against its dark plumage (above right). The plumage appears to be black in poor lighting. In good light, the plumage appears as a dark greenish glossy sheen. The plumage may look iridescent when light is reflected. Depending on the angle of reflection, colours ranging from glossy black to dark greenish to dark bluish may be displayed. The glossy sheen of its plumage was probably how this starling got its name. “The Asian Glossy Starling chick has a different plumage. It has a dark brownish upperpart. The underpart is creamy white with bold, dark streaks. Instead of the striking red eyes of the adult, the nestling has brown eyes. The nestling will wear this plumage up to the stage of fledgling (above left). With the eyes changing colour, from brown to red, the fledgling has grown into a juvenile (above right). This can be observed in a young juvenile that has plumage that looks identical to a fledgling. This juvenile can be distinguished by its red eyes and its lack of oral flange. The oral flange is normally present around the gape of a nestling or fledgling. The function of the oral flange is to help the parents target food delivery into the oral cavity. Young chicks like nestlings and fledglings that rely on food from parents are endowed with oral flanges to help in their survival. The oral flanges will gradually disappear as the birds grow older and become proficient in acquiring their own food.

“The juveniles in this flock had some variation in plumages. Images of a few individuals showed plumages in different stages of moulting. The upperparts were gradually moulting as seen from the patches of dark greenish sheen replacing the dark brownish feathers (below left). The underparts of the juveniles seemed to have streaks that were less bold and much thinner compared with the fledglings. “Also in the flock was a sub-adult with plumage that looked identical to the adult except for its underpart which has yet to be fully developed (above right). Small patches of creamy white was still visible. The primaries of this sub-adult were still dark brown (below left). “To complete the set of juvenile images, a composite of two images is included (centre image of the row beyond the above row). Please compare the two juveniles in the composite. The top shows a juvenile that has its head in adult plumage while the bottom shows another juvenile with almost full adult plumage except for its head. With this comparison, it would seem clear that moulting of the plumage from juvenile to adult follows no fixed pattern. Anyone care to explain?” 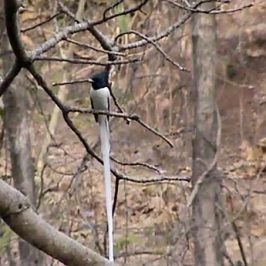 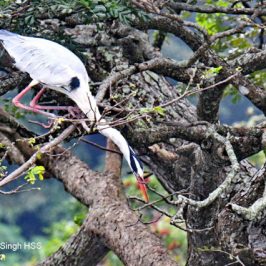 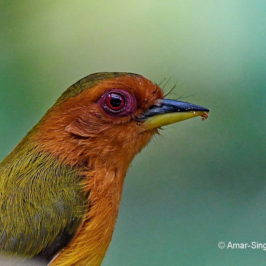