Sometime in August 2011, one of the Spotted Doves (Streptopelia chinensis) that comes to my garden to feed on birdseeds, found its way right into the house. These doves usually enter the house whenever they need to be fed LINK. In this instance the feeder was empty.

The bird walked right to the other end of the house, where it looked helplessly through the windowpane. It did not move away when I approached. Gently I caught hold of it, holding it firmly with both hands and avoiding handling the tail. I am aware that it will shed its tail feathers if they are handled LINK.

Bringing the bird to the front door, I inadvertently removed my right hand prior to releasing it. At that split moment it struggled and in the process shed numerous semiplumes. This startled me somewhat and I immediately released it. It flew off amidst an explosion of feathers.

Obviously a prey will be taken by surprise when a dove or a pigeon reacts by shedding its many semiplumes in the ensuing struggle when caught.

Semiplumes are feathers whose bulbuls lack hooks and thus their barbs do not cling together forming vanes. These feathers provide insulation and help to maintain the streamlined form of the overlying feathers.

An earlier post LINK talks about fright moult of pigeons – semiplumes that are shed to frighten predators. 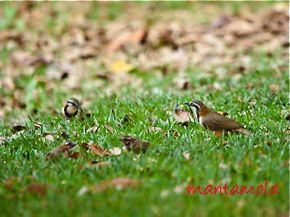