On 26th August 2011 Joe Hartman went to the back of his house in Chaiwan, Thailand where he usually feeds wild birds. As soon as he arrived, the 30 or more Eurasian Tree Sparrows (Passer montanus) flew off. “This is the most common species here, and the second common in my home country, Netherlands, after the House Sparrow (Passer domesticus),” wrote Joe.

But there was one particular sparrow that failed to fly off. When he approached it, the sparrow jumped towards the wall but did not fly off. It was then that he noticed there was something was wrong with its eyes (left).

The next day when Joe found it in front of his house and tried to pick it up and return it to the feeding area at the back, it flew up to about 7 metres up, to one of the rubber trees (Hevea brasiliensis) next to the house. According to Joe, it flew “like a helicopter, going up quickly but advancing forward very slowly.” It then carefully settled down on a branch.

So the sparrow can fly, but awkwardly. It knows how to go back to his foraging place, as every time Joe checked, it was there. Sometimes it scrambles to the nearby chilli bush (Capsicum annuum).

Apparently the sparrow is partially blind. Joe is convinced that it can see a little, “mainly just light and dark. It sometimes flies to a water tank I have near to the feeding place. The tank is blue, very blue, so I guess it can see the difference in colour. …As my house is yellow it might see that as a contrast with the green surrounding, that’s how it manages to go to the other side of the house. Maybe its defect will improve slowly, I hope so.” Unfortunately, on the morning of 29th August, Joe found the sparrow dead at the feeding place. “Not killed, not eaten, just dead,” reports Joe.

So ends the sad story of a partially blind Eurasian Tree Sparrow. It successfully managed to evade being predated by cats, dogs and even snakes for some days, but eventually it succumbed to its handicap. There is a slight wound around the wing area but what caused it has not been established. 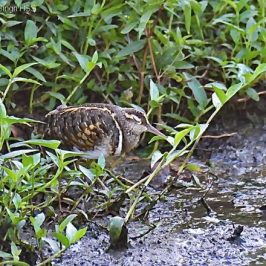 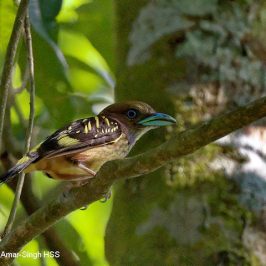 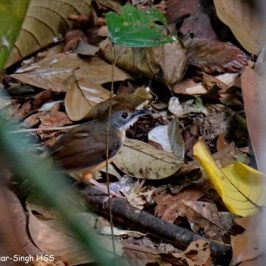 “I saw a pair of this near threatened Short-tailed Babbler (Trichastoma malaccense poliogene) that were... 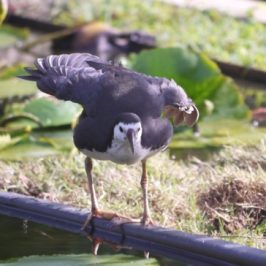 “A discussion thread on one of Dato’ Dr Amar Singh HSS’s old posts prompted me...