“Oriental Dwarf Kingfisher (Ceyx erithacus/rufidorsa), also known as Three- toed Kingfisher, is best known to birders and bird-photographers for their straight, shrilling, mid-storey flights and remains one of the four enigmatic river species belonging to the family of Alcedinidae.

“Both are described and written in many ways by different scientific researchers and authors, in differing taxonomical views in hybridization. To this day, views remain in dispute.
Some authors follow Sims (1959) in treating C. erithacus and C. rufidorsa in the same polymorphic species, conspecifically known as -Oriental Dwarf Kingfisher- C. erithacus.

“Then, we had Ripley & Beehler (1987) who stated that Black-backed and Rufous-backed should be considered split into separate species. Authors like B.E. Smythies and Davison to name few soon followed. Chasen & Kloss (1929) even echoed the addition of another migratory subspecies motleyi to the local population of Black-backed Kingfishers C. erithacus.

“From a birder-photographer’s field observation point of view, for my own convenience and simplicity in present times, I choose to categorize the Oriental Dwarf Kingfisher C. erithacus/rufidorsa as follows, and readers need not agree with me:

“The object of this article is not to try to determine what is correct – best left to the scientific boardroom. But, to take you on a field visit tour of places I’ve visited – where these birds have been found, document my personal observations to share, enjoy the vibrancy and difference in plumages of these 14cm dwarfs – C. rufidorsa and C. erithacus.

“Should readers be interested also in the details of taxonomy, kindly refer pg. 382 of The Birds of Borneo by B.E. Smythies or similar.

“Apart from similar in sizes, the two species do share quite same habitats. Most of my findings were alongside stream trails in lowland and mixed dipterocarp and darkish under storey forests.

“An isolated C. erithacus was seen on a lawn outside bungalow at Maxwell’s Hill 1045m asl Taiping, Perak, Malaysia in March, 2007 after a heavy rain storm. Thought to be a discarded, yellow looking plastic toy duckling, it came to life and flew. At this time of year, a migratory motleyi from the Indian sub-continent/S.China cannot be discounted. “In updating the bird checklist for Biodiversity Institute Department of Wildlife and National Parks at Bukit Rengit, Pahang, Peninsula Malaysia, a pure C. rufidorsa resident was found and added to the Park’s list in June, 2007 (above left and centre).

“A short flight away to North Borneo (Sabah), I was greeted by a sub-adult C. erithacus – recognised by its breast-band, whitish belly and bruised looking beak (above right). Obviously, the hybrid bird with a striking putu beauty blue-black, forehead spot has been into sand digging prior to taking rest and contently posed over a stream bridge at Danum Valley Conservation Area – a reserve and scientific research centre of 438sq.km pristine lowland and hill dipterocarp forests on the mid- eastern side of Sabah.

“A high percentage of hybridisation between Black-backed C. erithacus and Rufous-backed C. rufidorsa Kingfishers takes place especially in Sabah. The cause of it is read to be the result of pre-historic sea level changes (Davison).

“Based on my sightings, numerous and repeated visits to different areas, I would put it to no less than 80% in line with B.E. Smythies’ quote while other field guide books choose to differ less. So far, to my knowledge, I have not come across a pure C. rufidorsa in Sabah nor a pure Black-backed C. erithacus in Peninsular Malaysia. My inadequate knowledge as a new birder in those days was of no conclusive help.

“A bus ride from the West coast of Sabah to Poring Hot Springs yielded another juvenile hybrid C. erithacus wearing white rear ear-coverts borrowed off his ‘kissing cousin’- rufidorsa to contrast below its ultramarine blue, rear ear covert or nape spot as described differently and with juvenile feet- a shade much lighter than coral (below left). “A birding retreat at Sepilok Jungle Resort Sandakan on the north eastern seaboard of Sabah provided a breathing space of relaxation and to enjoy a Hide-and-Seek game with a playful C. erithacus along the trail edge forest of the acreage private property.

“Correct lighting couldn’t have been better explained; the exuberant colours of its plumage best described by David R. Wells ‘The Birds of the Thai-Malay Peninsula’ Vol. 1 pg 518. in this (above centre) image whose bird’s rear view says it all if… only to include a chiffon black veil, this chick looks set for a hot evening of Arabesque in downtown Cairo!

“The black wedge-shaped markings like teeth saw on tail feathers looked to fade away indicated bird’s pre-adult phase (above right). “The same bird profiles an angle view to show breast-band of rusty orange- the remnant of immaturity (above left).

“While Sukau village sleeps on Kitabatangan River, Oriental Dwarf Kingfishers C. erithacus heard and seen in a flash of whatever kind, along the river, paled in comparison to an eleventh hour, new record sighting and photograph of a rare vagrant- Sacred Kingfisher Todirampus sanctus on 10 Nov.2006. The bird received a deserving mention in Quentin and Karen Phillipps’ Field Guide to the Birds of Borneo (Sabah, Sarawak, Brunei and Kalimantan), a must and useful book to have birding in Borneo.

“It will do no justice to leave Sabah without a visit to the RDC (Rainforest Discovery Centre) at Sandakan. Here I was much rewarded with an array of adult plumages of hybrids C. erithacus and interesting observations issued. The above plates (centre and right) show adults with no black tailed tips.

“Will Brooke’s ‘County’ have much to offer? “For this, readers will have to visit and be well received by a shrilling shoot pass of the mascot bird of Lambir Hills National Park 465m asl Miri, Sarawak. Where the whistle blow ends, likely one will see a brightly yellow-red, signature bird of Lambir Hills- the Rufous-backed Kingfisher C. rufidorsa – perched in that direction, a little distance away (above left).

“To truly enjoy this resident bird’s flying routine of sorties the Sarawakian way, just sit back and laze with time standing still. Watch the balancing perch of this gorgeous bird of the orient- Three-toed Kingfisher gripped a tree branch with its two toes forward and the third behind (above centre).

“Be it rain or shine, the Red-arrow would show up, be there staring from its perch waiting like the wet look of this image (above right) taken after a heavy rain shower. Red-arrow saw me off on its last sortie flight of the day with a fly pass in front of my chalet. That smokeless trail left a message that shot through my heart.

“It is not Goodbye but… see you again soon!” 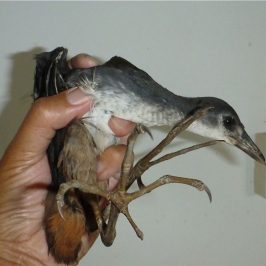