I have always known of Loke Wan Tho’s classic, A Company of Birds – but there never was a desire to read it. After all, isn’t it supposed to be just a book of photographs? But two things that happened recently led me to the treasures that are in this book.

In mid-July, Lim Kim Seng of the Nature Society (Singapore)’s Bird Group wrote a letter to the editors of BirdingAsia declaring his unhappiness that I paid scant attention to Loke Wan Tho and his book in my paper, “Forty years of birding and ornithological research in Singapore”. There were other peeves but this particular one jolted my mind back to the book. Rightly, his letter was rejected as it was submitted five years too late, details of which can be viewed in this LINK. Then, barely a month later, Dr Tan Wee Kiat (the chemist, not the orchidologist), unexpectedly presented me with a copy of A Company of Birds that he sourced from the internet (left).

“With this out-of-print book in hand, I could not ignore reading it any longer. Browsing through, especially the many black and white photographs of birds that were taken more than half a century ago, I was immediately impressed with the detailed accompanying notes. Then I started reading the introduction where the author detailed how he first became interested in birds.

“With the eminent Indian naturalist Salim Ali as his companion, he learnt how to make accurate observations and take precise notes. His black and white photographs, taken during his many expeditions throughout India, the Central Highlands of New Guinea and Malaya (now Malaysia), filled the book. Each photograph is accompanied with detailed notes on bird behaviour, notes only a photographer sitting patiently inside a hide can deliver.

I immediately saw the reasons why he was not enticed into taking the twitching route. This is the path most local birdwatching enthusiasts take – to end up always ticking checklists and compiling species lists. Firstly, the author was fortunate that he had an accomplished naturalist to guide him. Then there was his interest in photography, a passion that made it necessary for him not to move in a group.

Half a century later and after many decades of organised birdwatching, very few locals have come up to his standard of observations and note taking. Sadly, the majority of our birdwatchers are still looking at but not studying birds. This was exactly the reason why the Bird Ecology Study Group was formed in 2005. By maintaining a website dedicated to bird behaviour, we have succeeded in getting bird enthusiasts to study birds in the field. The numerous posts help serve as examples of bird behaviour that people can look for in the field. In nearly all cases, observations submitted were accompanied with photographs. So most of our contributors are either bird-photographers or birdwatchers who believe in the usefulness of the camera. And currently, there is a growing number of people who are using the videocam when out watching birds.

Loke Wan Tho’s A Company of Birds has confirmed my earlier suspicion that experienced leaders are a necessity if the local birdwatching scene is to improve. Yes, we have trained many birdwatchers, but we urgently need to train them in taking accurate observations and making precise notes. Only then can they make useful contributions to ornithology.

Indeed, reading the book would be a first step to a better birdwatcher, whether you are a beginner of otherwise. 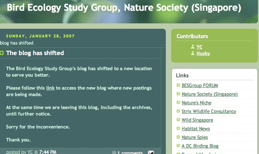