“The Little Tern (Sterna albifrons) has been well documented in earlier postings. An account of a juvenile having difficulties swallowing a large fish has been posted recently LINK. This happened at Lorong Halus Wetland, where a family of Little Terns was located recently. I must be one of the last few to photograph them before they departed for good in mid July 2011.

“The two juveniles from this family of Little Terns were discovered on the rocky bank of Serangoon Reservoir, Singapore’s 17th reservoir and newest. Faithfully, the juveniles would wait for the return of their parents (above left). Invariably, the arrival of a parent will generate great excitement in the juveniles as they compete for attention. As observed, each trip would yield only a single fish from the adult tern. The fish would be brought back in its bill. Only one juvenile would get to fill its stomach while the other would have to wait for another round. “The juveniles had no problem looking out for their parents. As a matter of fact, they had no problem recognising danger. There was an occasion when the juveniles flew off abruptly. Another photographer and myself wondered if we had unwittingly spooked them. Seconds later, a Brahminy Kite (Haliastur indus) appeared out of nowhere and flew low over the site. It dawned on us that it was probably the impending danger from this raptor that had made them fled. Later, after the coast was clear, the juveniles returned safely to site. “The juvenile terns would always get excited and perked up when they sensed the arrival of a parent (top and above left). Their bills would gape and high-pitched urgent chattering would emerge from their throat. Neck extended and feathers ruffled, each juvenile would puff itself up. Next, the wings would be unfolded, raised and stretched. With eyes fixed on the adult in flight, the juveniles would move in tandem with the changing position of the adult. The swaying movement of the out-stretched wings, scampering feet, and excited chattering seemed to form a short little dance. Perhaps, the ‘dance’ could be a pre-feeding ritual and also a survival instinct designed to attract the parent’s attention. Getting attention may help the juvenile have a better chance of receiving fish. “This ‘dance’ display would only stop after the adult had closed-in for the actual feeding (above right). Moments before being fed, the juvenile would cease its ‘dance’. The beautiful moment of feeding was short. With wings folded, the juvenile would prepare to receive the fish from its parent. The fish would be transferred, bill to bill (left). The juvenile would hold the fish in its bill for less than a second before it disappeared straight into its throat. Mission accomplished, the adult would take off immediately for its next round of duty.

“The complete feeding and pre-feeding ritual was over in 6 short seconds: 5 seconds for the ‘dance’ and under 1 second for the actual feeding.” 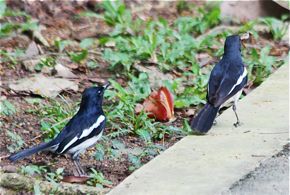 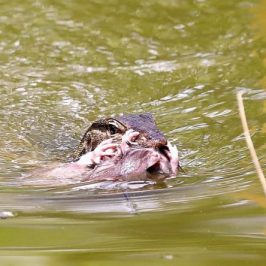