Francis has now documented a video of a similar feeding (above). Taken at the same location but about a month apart, this is a different Banded-bay Cuckoo that “looked a bit younger at the time of the video capture compared to the previous cuckoo that was photographed. This was based on it’s appearance and the fact that the previous cuckoo was much more active in flying about. I have no way of determining the age of the Common Iora host. This goes to prove that the Banded Bay Cuckoos have been pretty successful in parasitising the Common Ioras [in Singapore] this year.” Another trait the video clearly shows is that the fledgling remains where it is with bill agape whenever the iora arrives with food. The iora then moves in to place the food into the gaping red throat. Only then does the fledgling lunges forward, hoping for a second feed (above). And invariably the adult moves aside or flies off.

This again shows the superiority of the video over the digital camera in the study of bird behaviour LINK. 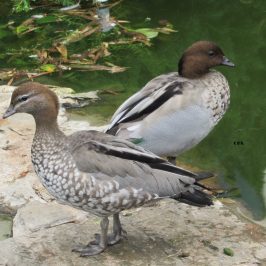