“I cannot imagine myself to be a witness of sexual assault – of the avian kind. But it happened. I was at the right place at the right time to witness one such encounter. It happened on 21st November 2010 morning. As the sky was blue, I decided to try my luck to capture herons in flight. I proceeded to wait at a strategic location at the edge of the heronry where the Grey Herons (Ardea cinerea) would fly past.

“While waiting, this pair of Grey Herons in breeding plumage were seen in their nest. One of them took off; leaving its mate alone in their nest. Suddenly, after a few minutes, a Grey Heron descended onto the nest. At first, I thought this heron was its mate. It had flown in from behind and was thus not detected by the unwary heron that was in the nest. Although partly obscured by foliage, I could make out that it had mounted itself on the back of the unwary heron. “With out-stretched wings, this heron lord over and startled the heron in the nest (above left). By this time, I had a sinister feeling that the intruding heron was not the same bird that had left the nest minutes earlier. It dawned on me that this was another individual. A sexual assault was happening right before my eyes! “The intruding male must have seen the legitimate male leaving the nest. He ambushed the female by mounting onto her back immediately upon landing. The female was caught by surprise. Her first reaction was to give off a scream (top right). Then, she turned her head to face the intruder. A struggle ensued. With the intruder on her body, the restrained female could only move her head in distress. Still, she resisted and tried to put up a fight. There were brief moments of crossing and thrusting of bills (above left). However, the ‘rapist’ proved too strong. He managed to force the female into submission by using his bill to hold onto her neck (above right). Copulation probably occurred during this brief period. The entire episode including the struggling was over in about 20 seconds. “Just as suddenly as it began, the assault ended abruptly when the intruding male was driven off by the arrival of the female’s legitimate partner. The female appeared glad as she greeted her legitimate spouse’s arrival with her partially opened beak.

“After the male had settled down, she took a bow followed by fluffing up her feathers (above left). Shortly after that, it was the male’s turn. He lowered his head to return the bow. As he did the bow, the side of his bill briefly touched the female by the side of her neck (above right). The gentleness of the touch was a comfort to watch. Was it done to comfort the female after her ordeal? The female took another bow before the pair settled down and indulged in preening of feathers. All seemed to return to normal as they put the ordeal behind to carry on with life.” 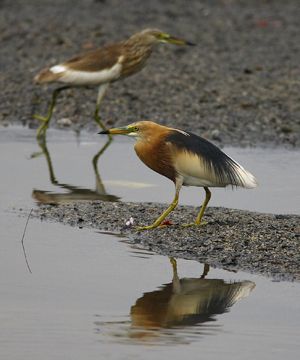 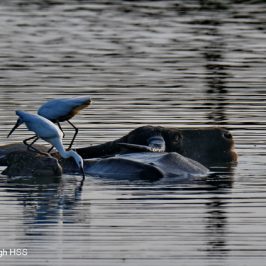 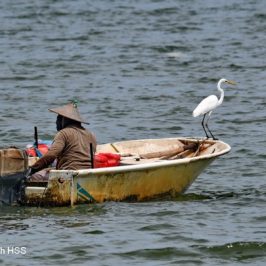