“In early September 2010, I posted my observations of two nesting of a pair of Pacific Swallows (Hirundo tahitica) in quick succession, one in April and another one in June 2010 (How Frequent Do Pacific Swallows Breed?). “On the 25 April this year, I noticed that the nest was in use again. A Pacific Swallow was seen in the nest, apparently in ‘confinement’ to lay eggs or incubating. Unfortunately, a few days later on 29 April, something happened and the nest was stuffed with a lot of feathers (above left). The next morning one of the birds was seen near the nest (above right).

“The nesting was confirmed to have failed when a pair of Pacific Swallow, most probably the same pair, was seen on May Day (1 May which is the ‘Labour Day’ in Singapore) constructing a new nest nearby. This will be the subject of another posting.” 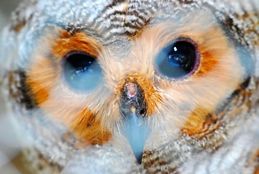