“A pair of Common Ioras (Aegithina tiphia) was encountered busy collecting spider silk in mid February 2011. It seemed that the sticky spider silk is an essential natural adhesive that this species liked to use for their nest building. It is used effectively to bond twigs together to form, as well as anchor, their nests. Their nests were often intertwined with plenty of whitish spider silk.

“I found this pair actively foraging and searching amongst the foliage of a small tree. Instead of food, their target was spider silk. They were seen peeping into the space where leaves were overlapping each other. Most of their harvest of spider silk was found within the gaps of such overlapping leaves. The birds would use their beaks to probe into the gaps to collect the sticky, whitish thread-like material. Then, they will disappear into the canopy where their new nest must be taking shape. After a brief moment, they will be back; sourcing for more. “The interesting and amazing part was that the birds were quite acrobatic. Unlike the usual perches of stems and branches, this pair showed off their skills by perching on the razor-thin blades of leaves during their forage. The sharp ends of their claws were used to grip along the edges of leaves. They even turned topsy-turvy; gripping the blade of a leaf whilst going about in their mission. If you were to look closely in the circled area in the picture, one of the sharp claws of the male iora even made a puncture from the underside of a leaf (above). “Due to the nest being hidden high in the canopy, their nest was out of sight. However, another pair that was building their nest way back in April 2008 was more readily observed. Pictures of that pair were attached to illustrate the extent of spider silk used in the iora’s nest. This nest, built at a height of about 2.5 metres, was fully covered by whitish looking spider silk along its exterior. Generous amount of the material was also used to secure the nest onto the horizontal branch. Both male and female were involved in nest building. They took turns collecting nesting materials and returning to construct the nest (above).

“Unfortunately for the pair in 2008, nature was harsh. After painstakingly building up their nest for days, the nest was destroyed after a heavy storm before it was completed. The couple must have been devastated as the nest was nearing completion. The badly damaged nest was abandoned. Hopefully, the more recent couple will succeed in their nesting and propagate this great songster species.” 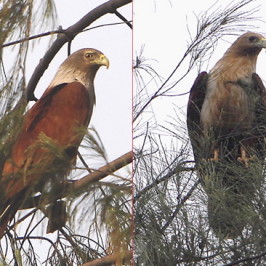 Frank Chiew of Dairy Farm Crescent in Singapore reported the nesting of a pair of...