“While taking a morning stroll along a canal on 23 April 2011, I was admiring the avenue of mature raintrees along the shaded sidewalk (left). Then a flash of aquamarine blue caught my eye as I scanned the shallow waters that were receding with the falling tide.

“Upon investigation, I found that a Collared Kingfisher (Todiramphus chloris) had successfully captured a fish and was holding it securely within its beak (below left). The kingfisher then repeatedly bashed the fish against the branch until it ceased struggling. However, instead of swallowing it, the kingfisher then flew across to the opposite bank and entered a hole in the vertical wall (below right). Within seconds, the kingfisher had emerged and returned to its perch and resumed scanning the waters below. It continually repeated its cycle of fishing, bashing and entering the same hole, most certainly for the purpose of feeding its chick/chicks nesting in the darkness. “Both parents were to be seen around the vicinity at most times and maintained constant visual and/or vocal contact with each other. On one occasion, I witnessed one of the kingfishers actually dive-bomb a stray cat that had inadvertently wandered within a 10 metre radius of its active nesthole. For a relatively small kingfisher, their protective instinct over their progeny is certainly quite remarkable. I wish these parents every success in raising their family along this canal and hope to see adorable fledglings in time to come.” 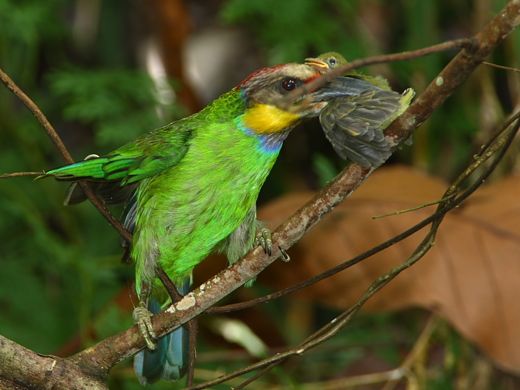