On 24th April 2011, CL Chng and PF Loke of ButterflyCircle were in the forested area of Singapore’s Upper Seletar Reservoir Park photographing butterflies. There they met some fishermen who pointed them to an injured White-bellied Sea Eagle (Haliaeetus leucogaster) (left).

Being inexperienced in handling injured birds, especially an injured raptor, they contacted Khew Sin Khoon, who in turn contacted a number of nature enthusiasts. The outcome was that Biswajit Guha, of the Singapore Zoo managed to get Raja Segran of Jurong Bird Park to render assistance.

“In the meantime, Loke kept watch over the bird to ensure that it did not fall prey to any predators that may be lurking around the forest,” wrote Sin Khoon. “The traumatised bird was in a bad state, with its tail feathers completely torn off. Its right eye appeared opaque and it was obviously blind on that side (below left). The bird appeared weak and even though it flapped its wings occasionally, it was unable to fly… One of the fishermen volunteered a catfish which was thrown to the injured bird. After a few tries, the eagle ate the fish hungrily, finishing the meal in its usual predator style (below right),” continued Sin Khoon. When Raja and an assistant arrived at the scene, the injured eagle, too weak to put up much of a fight, was easily caught and wrapped in a towel so that it would not further injure itself or the handlers (below). It was then put into a kitty box and brought back to Jurong Bird Park for treatment and care. According to Sin Khoon, “Raja opined that it was probably kept by some poachers in a cage for some time and dumped in the forest to die when the owner saw that it was in a condition that it was unlikely to survive for long.” Note that the tail feathers had been removed to prevent the eagle from flying (top image).

The eagle was still alive a week later and recovering from its injuries, but the damage to one of its eyes was permanent.

It is indeed heartening to see butterfly enthusiasts concerned about an injured White-bellied Sea Eagle and whose nature conservation efforts extend beyond just butterflies. 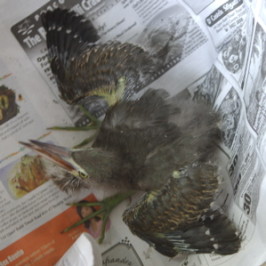