“Between late March to mid-April 2011, I found myself becoming increasingly enamoured by a small flock of migratory Chinese Pond Herons (Ardeola bacchus) that had chosen an open grassy field as their feeding ground. Initially, both winter (non-breeding) and summer (breeding) plumages could be seen simultaneously in different individuals (above). These different plumages have been well described and illustrated (Lekagul & Round, 1991: Plate 5; Robson, 2000: Plate 52). “At this site, there was a total of between eight to ten individuals. Oftentimes, they would be feeding

gregariously (above), but were also confident in feeding as individuals. The pond herons demonstrated a voracious appetite and hunted for long periods from dawn till dusk. Their diet consisted of a broad spectrum of creatures, including frogs, lizards, earthworms, grasshoppers, crickets. On one occasion, I actually witnessed one pond heron stalk, chase and pluck a dragonfly from the air, much to my amusement. Please see video clips below for examples of their feeding behaviour (on earthworms): “One afternoon, while observing the pond herons, I was startled by the annoying and incessant barking of a stray dog close by. My immediate concern was for the safety of the pond herons, but these birds were apparently unperturbed by the presence of this canine creature (left). Perhaps the birds may be aware of the old adage that ‘barking dogs never bite’!

“On certain afternoons, temperatures could soar under a cloudless sky. To deal with the heat and keep themselves cool, some pond herons resorted to panting, where fluttering motions could be seen in their necks as their beaks were slightly parted. Please see video clip below for an example of its panting behaviour:

“When I visited this site on the 22 April 2011 (Good Friday), there were just two to three pond herons remaining. By the 25 April 2011, none were to be seen, as they must have all headed northwards to reach their breeding grounds in time and ensure the continuity of their species. Chinese Pond Herons typically breed between March and May (Robson, 2000).”

ACKNOWLEDGEMENT
I am grateful to Subaraj Rajathurai for enlightening discussions and kindly sharing his personal encounters and in-depth experience of pond herons in Singapore and the region. 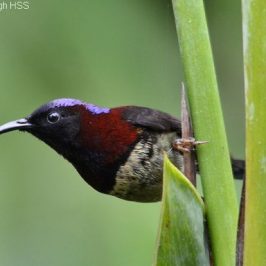