Dave Anderson sent in two images he took from his Bungaraya Condo on Saujana Resort in Shah Alam (Kuala Lumpur, Malaysia) on 20th April 2011 with a note: “…They are remodeling the golf course we look out on and in the process are draining two or three ponds. This has attracted lots of storks and other water birds who are feeding on the small fish, frogs, crabs, etc that are being concentrated in less and less water. Last night I must have counted close to 60 storks. I have attached some photos as they sat down on top of our condo for a while. I think there might be two Milky Storks (Mycteria cinerea) mixed in with these Painted Storks (Mycteria leucocephala). Not sure. But it is interesting to look at. They are adding another small lake, so the monitors and birds will still be coming around.”

Daisy O’Neill from Penang, Malaysia commented: “Those storks on the rooftop look like Painted Storks. Is there a zoo nearby?. If they are wild and found where you live, you are extremely lucky to see virtually the whole population of Painted Storks in Malaysia massing in your playground.

“These creatures could likely be zoo escapees. Can’t think of a place in coastal areas of Malaysia to be seeing such a large flock. Milky Storks hard to come by these days apart from a few that was symbolically released at Kuala Gula in Perak on Wetlands Day a few years ago and nothing much was left or heard about them.

“There is one in the picture that shows more white than others, hard to tell but for a guess, I would say a juvenile Painted Stork.”

“This is one of two resident Pied Fantails (Rhipidura javanica longicauda) and one of our... 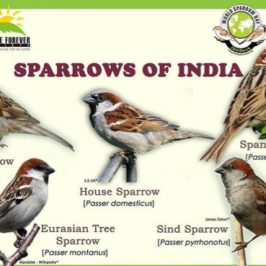 “Some 25-30 sparrows live in our garden… in the bougainvillea scramblers mostly. They are mainly...