Johnny Wee was at Singapore’s Pasir Ris Park recently where he came across a single large chick literally filling up a smallish nest (above left). When a smallish bird arrived at the nest to feed the chick, he immediately realised that this was a case of a cuckoo hijacking the nest of another bird (above right).

The cuckoo has not been identified but the host is a Golden-bellied Gerygone (Gerygone sulphurea). The smallish gerygone must have worked extra hard to source food for the large chick.

Cuckoos are brood parasites. They do not build any nests but lay their eggs in the nests of other species, first removing one of the host’s egg. When the cuckoo’s egg hatches, it will toss out any host’s chicks that are around.

The cuckoo chick subsequently fledged and was seen being fed by its adopted parents. 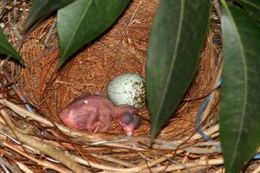 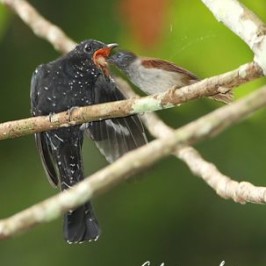