“About your comments on the calls of the collared kingfisher, I have all the three different calls recorded about two years ago. The attached Collared Call2.mp3 HERE and Collared Call3.mp3 HERE have all the 3 different type of calls mentioned by you. The first type, described as ‘usual repeated double-note noisy cackling’ by you, is in the first part of Call2. I interpret this as either a warning call or distraction call to intruder. It could also be a territorial call. The second part of Call2 has the 2nd type as capture in your nice video. I interpret this as a territorial call. As for the ‘subtle’ call which I have it in Call3, I agree with your interpretation of it being a comfort call. This call was also captured in my recent Youtube video titled “Coppersmith Barbet Hammering Copper” @17sec of the video, HERE.

“As for the ‘angel’ pose, your photo showing the back view appears to be taken in bright sunshine. It looks like this is a feather maintenance behaviour. Outside my condo there are Collared Kingfishers residing in two majestic rain trees for many years. I always see them in the late afternoon but have never noticed such behaviour, perhaps because they are too far away or that was not the right time to perform such routine.

“I have seen such feather maintenance in Rock Pigeon (Columba livia). The attached image (left), taken from my bedroom window at about 2.15pm (very hot, most birds hiding in shade at this time), shows 2 Rock Pigeons sitting on the lawn downstairs sunbathing, with the brown-black-white pigeon spreading its wings similar to the ‘angel’ pose.”

Lena’s response on the same day: “The picture showing the angel pose was indeed taken in sunshine, but at about 8.45am, not when the sun is strongest. Also I notice the angel pose is adopted almost as a matter of course, when one bird lands next to the other – this was also conveniently captured in the video, taken again not in particularly strong sunshine at about 9.30am. You could still be right though about feather maintenance, like the way other birds do it by spreading their wings on the grass (and perhaps also efficiently ‘anting’ in the same exercise!).” 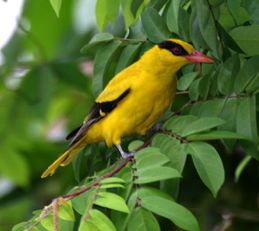 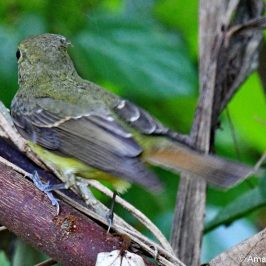 I saw this Green-backed Flycatcher (Ficedula elisae) today and would like to make some observations... 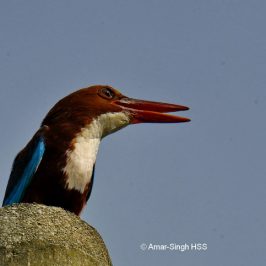 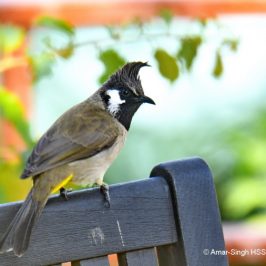 “This Himalayan Bulbul (Pycnonotus leucogenys) is an elegant bulbul that we saw often at a...